Netflix premiered its first Indian series ‘Sacred Games’ last month which was a blockbuster and is now set to make a yet another Indian series featuring one of India’s highest grossing franchise – Baahubali. It is an Indian media franchise created by K. V. Vijayendra Prasad and S. S. Rajamouli. It consists of a two-part film series (Baahubali: The Beginning & Baahubali: The Conclusion) directed by Rajamouli, an animated series (Baahubali: The Lost Legends), a graphic novel (Baahubali; Battle Of The Bold) and a trilogy novel series (first novel, titled as The Rise of Sivagami).

Considering the massive frenzy around this Indian franchise and the fact that it resonates globally, Netflix is coming up with a two-season original prequel series called ‘Baahubali: Before The Beginning’. Its recent announcement has left fans in high anticipation and here’s all you need to know about it.

What is the Premise of ‘Baahubali: Before The Beginning’?

The two season series will be a prequel to the ‘Baahubali: The Beginning’ and ‘Baahubali: The Conclusion’ movies, both of which are currently available on Netflix to be viewed by audiences around the world. The first season of this series will be based on Anand Neelakantan’s book, The Rise of Sivagami. The premise of the series details how Sivagami matures from a defiant and resentful girl into a wise queen, around the same time when the kingdom of Mahishmati rises from being a city-state to an influential empire.

According to the official Netflix description – “This (prequel) series captures Queen Sivagami’s journey from a rebellious and vengeful girl to a wise and unequaled queen. Power, politics, and intrigue find themselves juxtaposed against the rise of Mahishmati – from being a city-state to an empire. This is the rich backdrop and drama where the Baahubali franchise is set. The series promises to build on the incredible narrative style of the franchise – including its high production values, spectacular visuals and connective-epic story-telling.”

Production of ‘Baahubali: Before The Beginning’ 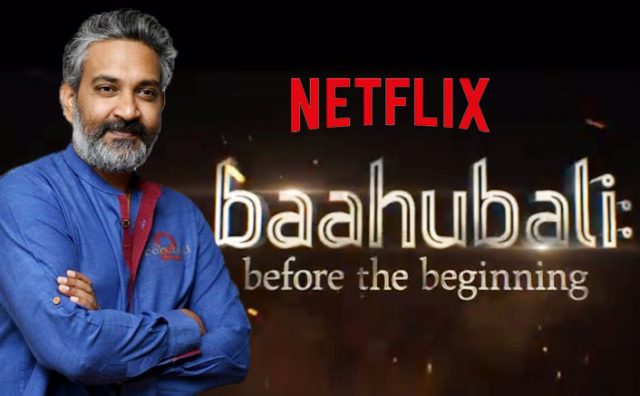 On the production front, Netflix has partnered with the ace team behind the Baahubali universe, including Arka Media Works and SS Rajamouli. Deva Katta and Praveen Sataru will be directing the series together. Season one of this series will comprise of nine episodes while the cast and release date has not been announced yet.

Director SS Rajamouli gave a statement that – “The World of Baahubali is extensive and immersive with strong characters and larger than life kingdoms. The films Baahubali -The Beginning and The Conclusion, are from one story set in this world and more dramatic stories were broadly conceived while building the Universe. The Baahubali Series, a prequel to the films, is one such story. I am very excited that this is being adapted as a Netflix Original Series. With Netflix as our partner, we have the opportunity to create a rich and riveting series and take this quintessential Indian epic to the world, which is very gratifying to me as a story-teller.”

While Producer, Prasad Devineni, from Arka Media Works, said “We have been working for over a year now in developing this story, a prequel to the films as a Netflix original series. We are happy to be partnering with Netflix to produce this amazing story. This partnership gives us the reach and the creative freedom to bring to life the full potential of the series in all its grandeur and exceed the high expectations set by both our films.”

Erik Barmack, VP, International Originals, Netflix, went ahead to state that “Baahubali is a world-class franchise that epitomizes the power of compelling stories that resonate globally. We are excited to work with some of the world’s most talented writers and producers on one of India’s most beloved stories. The series is a tremendous opportunity for us to give audiences more of the universe that they have come to love, and welcome millions more into the global Baahubali fandom.”