It’s been 50 years since Stonewall Inn, a gay bar in Christopher Street, USA was raided in early hours of June 28, 1969, prompting a series of a violent demonstration by members of the LGBT community. This unfortunate incident kicked off the Gay Liberation Movement. A year later in 1970, to commemorate the first anniversary of Stonewall riot and embrace love, equality, and diversity, LGBT’s in Los Angeles and Chicago commenced the Gay Pride Marches. Now on every June, people from across the world irrespective of their sexuality are proudly marching in the parade, celebrating the joy of their freedom and now brands are also in the fight of equality and here we have listed how Brands are marketing their LGBT Support.

The month recognizes the powerful impact of LGBT’s in the society and reflects the changing attitude of society towards sexuality. People from every sexuality stand on the belief that we all are the same. We all have the right and freedom to be who we are. Gay Pride March is a proud moment for us to embrace our identity, be it Lesbian, Gay, Bisexual, or Transgender and come out in public to proudly accept who we are.

Everyone loves to be appreciated, and on every pride month brands are marketing their LGBT Support by leaving no stone unturned to fly the flag of pride with bold campaigns and collections to promote diversity and actively support the LGBT community by marketing and advertising. Today brands are addressing LGBT communities as the later constitute a major section of targeted audience and for whatever reason, be it self-interest or an act of giving back to the society, LGBT’s interests are now a priority and it’s a proud feeling to see how big brands and millennials are appreciating the rainbow of Pride.

Swedish Multinational clothing company H&M has launched ‘Love For All’ collections to celebrate the equality, love, and togetherness with Pride Collection including t-shirts, shorts, caps, jeans, pool shoes, Windbreaker and more. 10% of the total global sale will be contributed to the United Nations Free & Equal campaign

Wear the colors of Pride with Fossil’s limited edition Pride Month Watch case. You can create your custom Pride Watch with rainbow straps and dials or 18mm pride color straps of your choice. Fossil has launched this Pride Boutique Collection in partnership with the first LGBTQ + Youth service organization, Hetrick-Martin Institute, which will get 100% of proceeds benefits from the collection. You also have a chance to get featured on Fossil’s Page by sharing Pride month watch on social media with hashtags #LoveInColor and #MakeTimeForGood 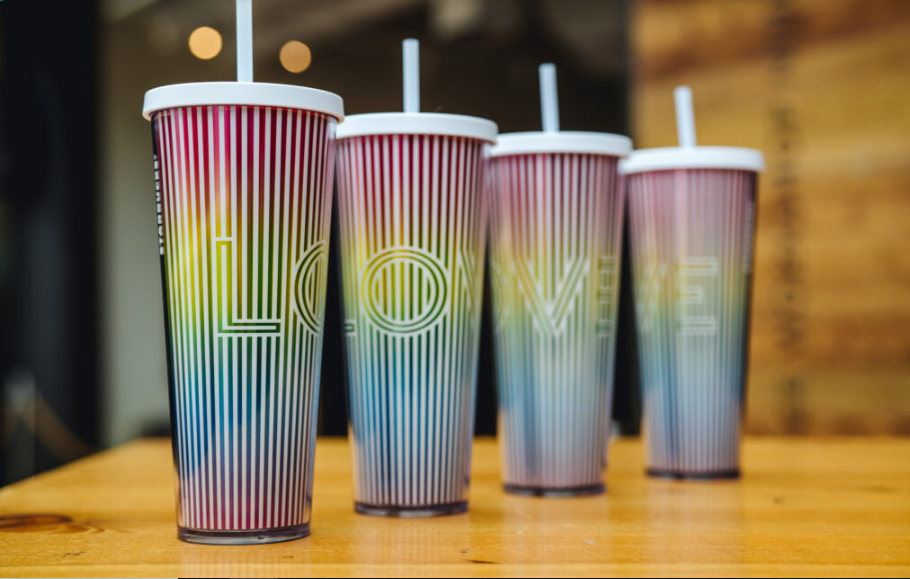 Take a sip of Pride celebration in Starbuck’s reusable rainbow striped Pride Cups with a simple message, LOVE or AMOUR (Canadian version) over it. The limited edition cup is available in U.S. and Canada stores at $16.95. Starbucks Foundation is raising donations upto $250,000 for Lady Gaga’s Born This Way Foundation to help mental health organizations and supporting resources who are helping LGBT communities.

Absolut has always been actively supporting LGBT initiatives with being the first spirits bottle to wear the rainbow flag. Brands are marketing their LGBT Support and this time, Absolut Vodka is giving a permanent place to rainbow with Absolut Rainbow Edition with Pride rainbow screen printed on the glass bottle. To spread fearless love, Absolut has partnered with Photographer David Lachapelle and non-profit organization, GLAAD to keep the Pride spirit high 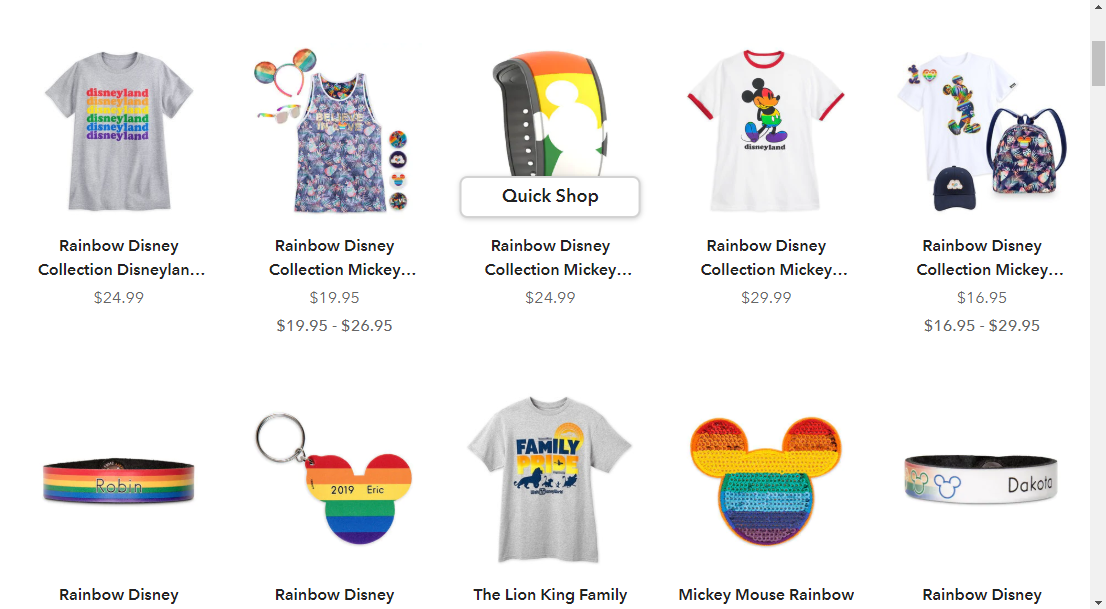 Disney Rainbow Collection has around 50 merchandise, including Headbands, Tank Tops, t-shirts, MagicBand, Keychain, and more. 10% of the proceeds will benefit GLSEN, which works for LGBTQ students to establish a safe environment. Disney also organized Magical Pride at Disneyland, Paris to celebrate the joy of love and attracted the LGBTQ community and their friends and family on 1st June 2019

To honor the 50th anniversary of Stonewall riot and like other Brands are marketing their LGBT Support, Reebok has replaced Reebok flag with a Pride flag in its Pride Collection Classic Leather, Club C, and Freestyle Hi shoes along with headbands, socks and ‘Stong and Proud’ tees and a tank top. A part of proceeds up to $50,000 will be donated to Fenway health

Actress Indya Moore is the face of limited edition rainbow colored CK’s Pride Capsule Collection including t-shirts, boxers, bikinis, thongs, bralettes and more for both Men and Women. A part of the campaign will go to LGBT Rights group, HRC

Prepared from Almonds and Brazilian sea salt, Kind Dark chocolate bar is supporting Pride with beautiful rainbow colored wrappers in partnership with Ali Forney Center (AFC). The bar will be sold till 31st July 2019.  100% of the proceeds will be donated to AFC for empowering LGBTQIA youths.

To celebrate Pride month and spread the message of equality, an eyewear company, Warby Parker is offering limited edition Parker Case in Blue Prism. In addition to this, all in-store purchases will come with Warby Parker’s rainbow tote. The company will also be donating to Lambda Legal and The Trevor Project 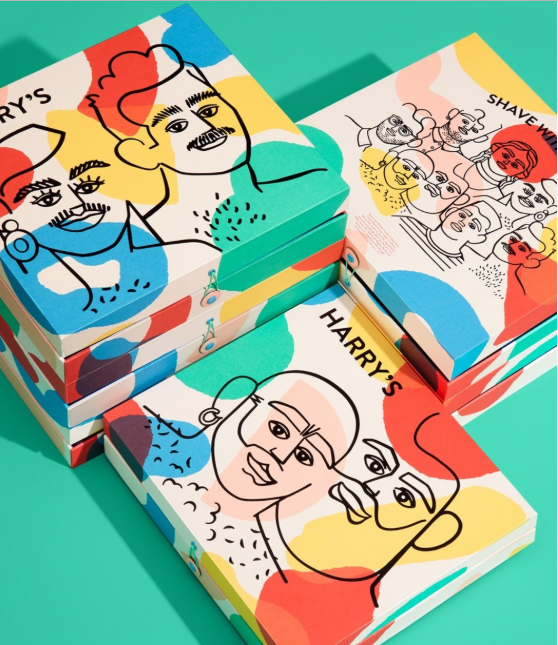 Brands are Remarketing their LGBT Support and this time Banana Republic CMO Mary has announced the Equality collection which allows a customer to purchase an item and out of its price 50% ( with a total cap of $60,000 ) of the amount will go to United Nations Foundation in support of Free and Equal Campaign for LGBT by UN. The Banana Republic campaign goes with a hashtag of #BRLOVEISLOVE. Mary states that she doesn’t want to be a bystander and want to participate in the Equality movement by creating awareness through such offers. 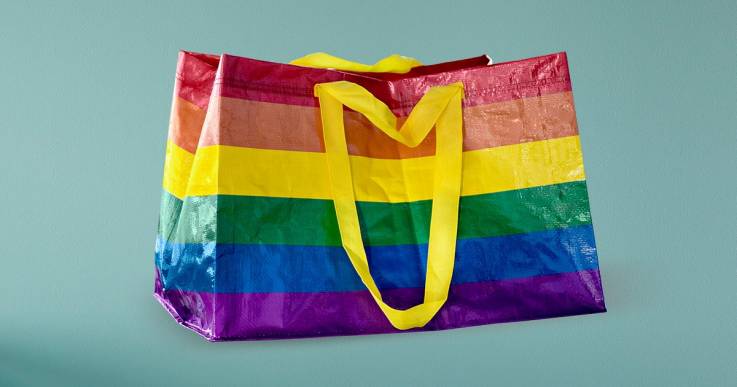 IKEA has been a part of this movement since past back when in 1994 it introduced a gay couple in its ad. This Pride season, IKEA has launched a rainbow color striped edition of the Kvanting shopping bag at just $3.99. From the Purchase price, 100 percent of the profitsgo to support the Human Rights Campaign Foundation. In addition to that, the Pride flag is being flown at all IKEA locations. 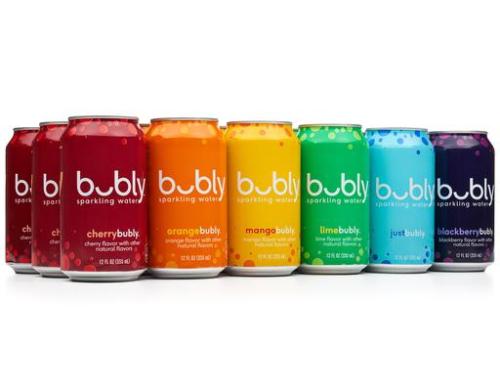 Brands are marketing their LGBT Support and so does Pepsi with its sparkling water brand bubly has also joined the campaign with special-edition All for Love Pride Pack which features 18 cans worth $10.99 having colors of the rainbow—including mangobubly, limebubly, cherrybubly, orangebubly, blackberrybubly.

Bubly has also entered into a partnership with the Stonewall Community Foundation, which supports the LGBT community with training, grantmaking, and scholarship programs

The brand has launched its campaign for Equality where the retailer will be donating 15 percent of the sales from the GAP and Pride Collection to United Nations’ Free and Equal Campaign for LGBTI Equality.