India is currently going berserk over Modi, Avengers End Game, IPL and the final season of Game of Thrones. While I am writing this blog, the second Episode of the Season 8 has already been released and with each passing day, the craze and fan theories are growing on the internet.

The fantasy based fictional web-series has also made brands capitalise on this popularity with numerous brand collaborations, brand integrations & social media posts to ensure the buzz stays up in the market.

According to Twitter India, #GOT has generated around 5 million tweets till 2nd week of April since the Ep 1 of Season 08 started streaming on Hotstar. Such is the popularity and search volume around Game of Thrones keywords that, many leading new age media houses started posting articles about the star cast of GOT web-series visiting India as part of the promotions, yes as part of their April Fool posts but they eventually got the much needed spike in their web traffic. Who knows “Winter is coming” might become a reality giving much needed relief to the scorching Indian heat.

This blog would cover some of the most creative posts around Game of thrones theme made by brands based in India to gain the much needed attention from social media. While Twitter clocked 5 Million tweets on #GameofThrones, data from Instagram ranked Indians amongst the top 5 fans of GOT across the world. It’s indeed a battle of supremacy on social media.

“Jon Snow might know nothing but Indians know everything about him”

Why posts related to Game of Thrones is a Win Win situation for Brands in India? 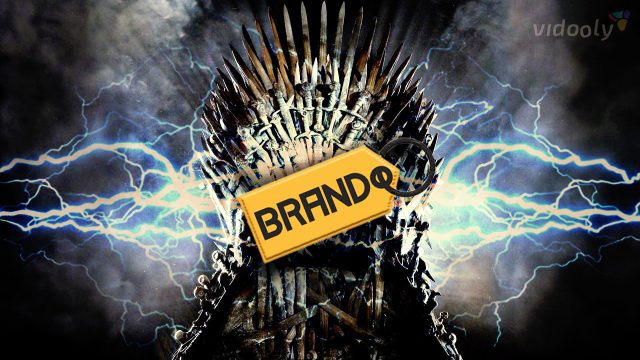 The majority of the audience engaging or watching #GameofThrones belongs to the age group of 18-40 years of age (Source: Internet). This particular age group is highly active on social media plus possesses considerable purchasing power and convincing power in the market.

In marketing jargon, the age group consists of the decision makers as well as influencers. Such Trending Topics on social media are always like extra icing on the cake for brands, where the extra icing refers to engagements gained without any significant investment.

In Reel & Real Game of Thrones either you win or you die in the battle, but planning your campaign around such trends only makes you win.

Result: A ready made relevant audience targeting with no significant investment + gain of organic followers and engagements that is equal to gold in current social media times. 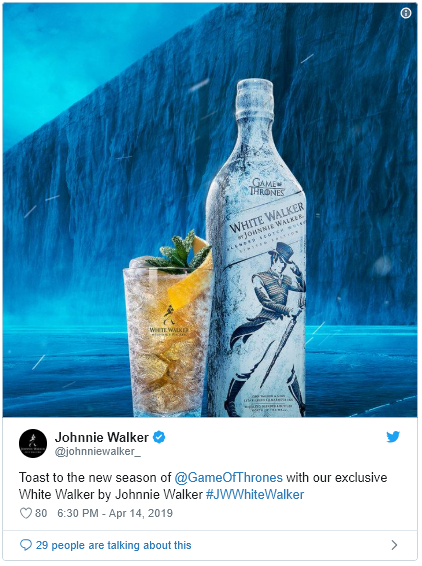 The list would be incomplete without the mention of the White Walker version of the popular scotch brand Johnnie Walker. The version of #GOT has elements of caramelized sugar, vanilla & fresh red berries and is best served ice cold or on the rocks. It’s a single malt limited edition scotch launched by Johnnie walker in collaboration with HBO.

The King is coming #ForTheThrone by Godrej’s Nature’s Basket 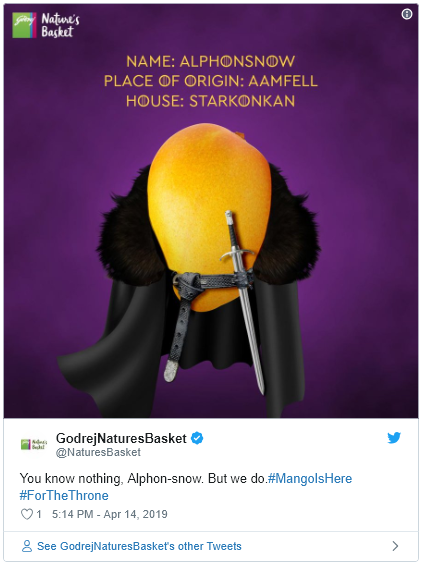 Probable the coolest welcome to another king by a company. The online based grocery and fresh fruits store owned by Godrej group laid down a #GOT style welcome to the king of fruits in India. Winter might be coming for #GOT fans on the internet but its summer in India and it’s time for munching on the king of fruits, i.e Mangoes.

#ForTheThrones: Throne of Cosmetics by M.A.C 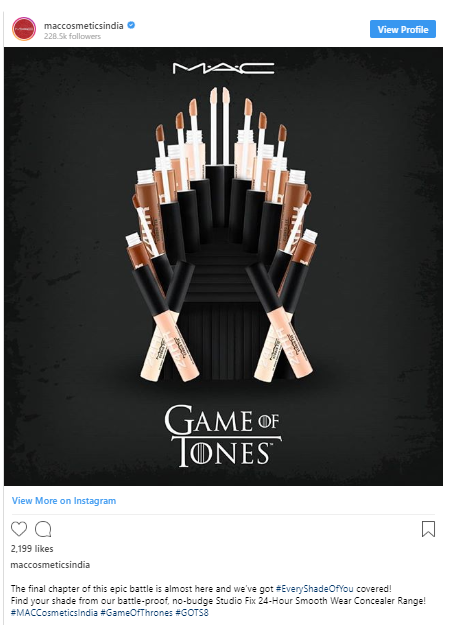 The Canadian based cosmetic company is well known worldwide for its wide variety of cosmetic products and is counted amongst the premium brands in the segment. Justifying its brand value, M.A.C marketing team decorates the #GameofThrones styled throne with its line of lipsticks showcasing different shades with a true royalty touch.

For a #GOT Viewing Experience by Philips India 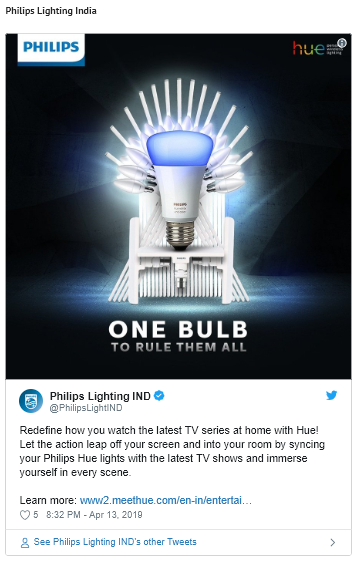 GOT episodes are full of actions and graphics that can be better experienced with the right lighting. No doubt with the high-end smart TVs available in the market, the true lighting can surely create an immersive viewing experience. That’s where Philips choose to pounce on and capitalise on the gap.

The Battle is On #FortheThrone by Xiaomi 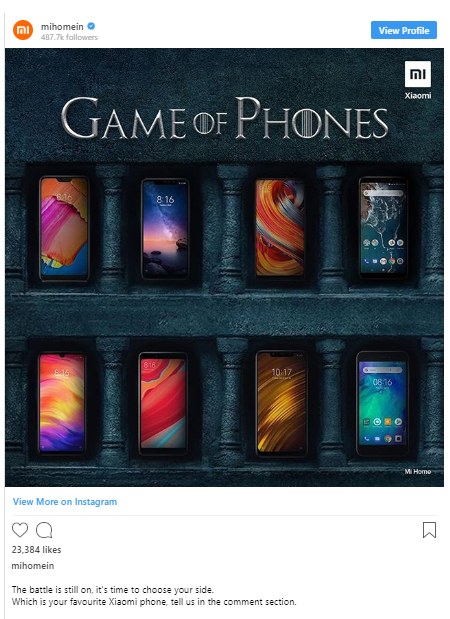 Xiaomi has been ruling the mid-range smart phone segment in India. A battle where Xiaomi is the clear winner. But in this #GOT themed post the battle is within different phones manufactured by Xiaomi. A creative way of showcasing it entire line of offerings in one go and that too with higher reach and engagements. 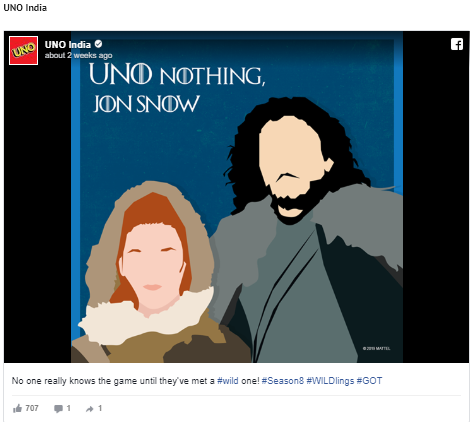 Everyone is well aware of the fact that Jon snow knows nothing. Using the popularity of memes around this topic, UNO India made a social media post promoting the game in real Jon Snow style. 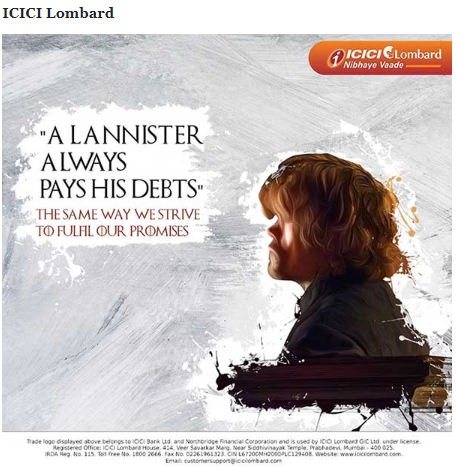 A true royal always pays off his debts in time, here posted in reference to Lannister character in #GOT. It can be termed as a post issued in public interest to leverage the popularity of Tyrion Lannister and gain more attention, reach and engagement.

The Ultimate Sacrifice made by Mountain Dew for Arya Stark

“A Can has no Name” might just sound a cliché marketing campaign with a blank mountain dew can for the buyers. But as the saying goes, “Looks can be Deceptive”, the campaign also might look very cliché but actually is one of the most creative product integration in #GOT theme by far. The special limited edition Mountain Dew comes in stark white colour in room temperature and once chilled the can starts revealing the iconic kill list of Arya Stark. Do check it out at stores near you. 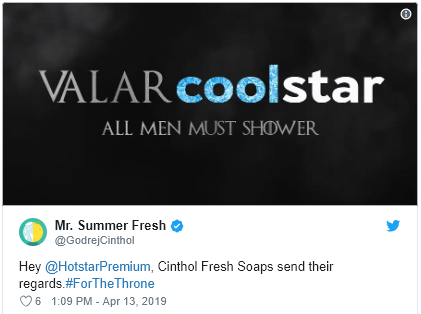 We all know what Valar Morghulis exactly means (if not then you better binge watch #GOT) but Cinthol never believed in causing harm to men. It might be freezing at Winter Fall but here in India its scorching 40+ and what a way to market your cool men bathing soap, exactly All Men Must Shower. 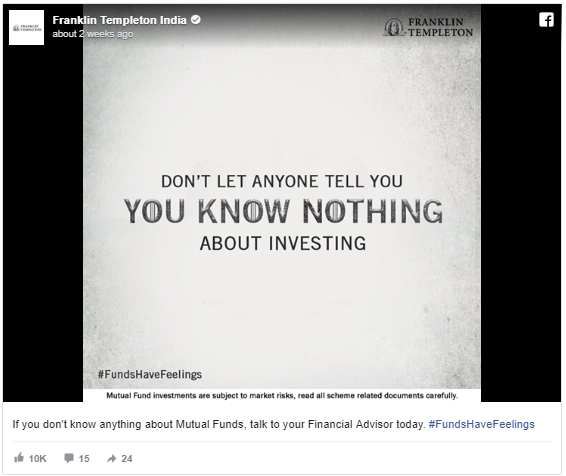 “Mutual funds sahi hai” and many such initiatives by the government made the common man believe and understand the good side of investing in it. However still there is a significant percentage of people who hardly understand mutual funds in detail. Franklin Templeton through this post made a call to action for people to initiate a discussion on mutual funds with their advisors. 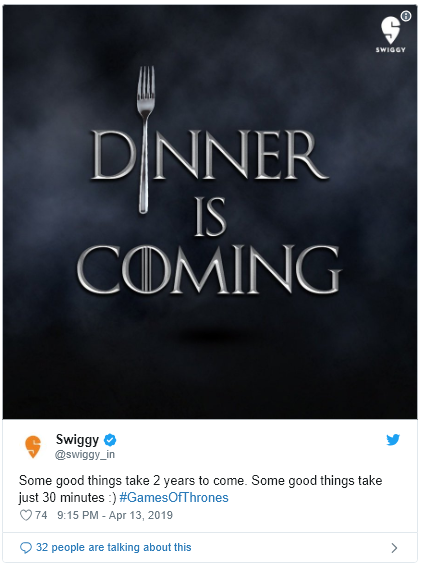 Game of thrones has set the benchmark in the making of web-series both in terms of content, popularity and viewership. While each season takes a lot of time and the makers do have an excuse saying good things take time but here Swiggy attracts its customers with a tag line good food and 30 minutes’ delivery.

#GOT: Fighting for your PCs and Laptops without an Army & Dragons by Quick Heal 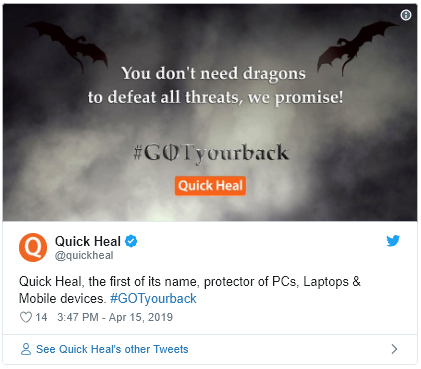 Every Indian knows what quick heal does but as an unique way of marketing w.r.t #GOT theme, the anti-virus provider’s social media post read “You Don’t Need Dragons to defeat all threats, We Promise”. Definitely all battles do not require an army and specialised weapons.

#GOT: E-Commerce Giant fulfilling every wish Since 2007 by Flipkart 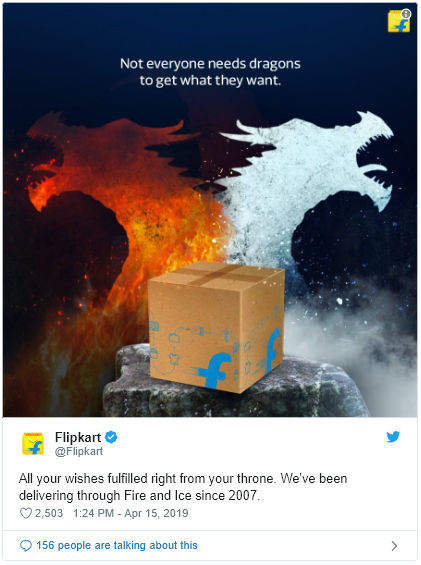 While in some cases you might need an army comprising of men, weapons and dragons to fulfil your wishes but in today’s digital world it’s just a click of a button that can fulfil all your requirements and also get it delivered at your doorstep. Stop worrying for fire and ice and start ordering.

Winter is Coming: Finally, the Most Anticipated Winter is Here by AUDI 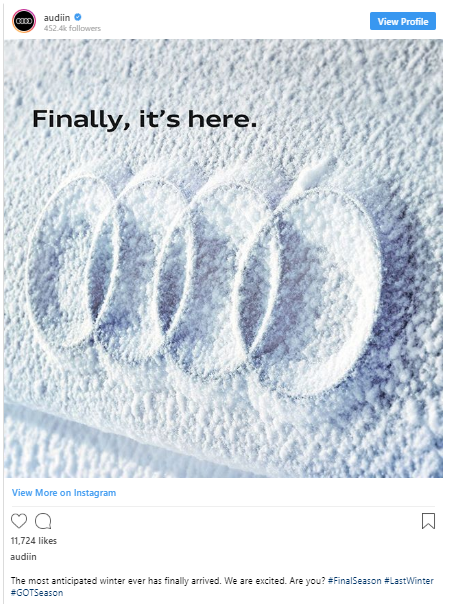 Well we do have the winter every year but this year Winter is special with the last season of #GOT. A post finally welcoming the winter with the AUDI rings covered with fresh powdered snow. Truly symbolising winter.

The Story of Rajasthan in True #GOT Style

One of the most creative tourism boards in India, Rajasthan Tourism with a tag line of #PadharoMhareDesh came up with a story with characters and spice from #GOT. A video of 2:20 minutes totally describes each place that is worth visiting in Rajasthan. Starring Jon Snow and Tyrion.

In The End you will surely need it: Durex #GOT you Covered 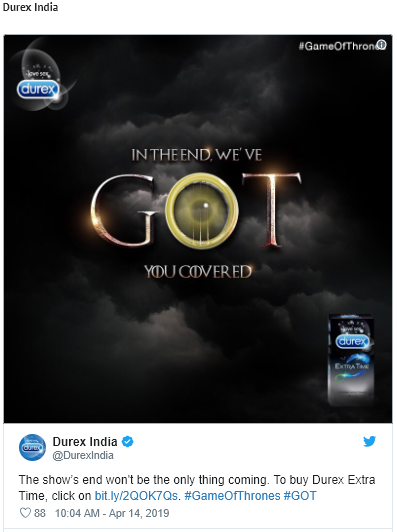 The marketing team of Durex have been doing really awesome campaigns since time immemorial and this time also they did hit the bulls eye. Who knows you might be interested for the action after watching #GOT and for that Durex surely has a plan for you and that too with some extra time.

Are you a Creator,Agency or Brand looking for: Right Time?, Right Audience?, Right Platform?

We have #GOT all the #answers. #Signup or use our free #Insights #tools to look into the #future https://t.co/AVXjIHUoBD#Episode3 #WinterIsHere #GameOfThornes #GOTleaks #ForTheThrone pic.twitter.com/Uz8zowEmoB

Every brand or marketing agency have this question, Right Time to upload a content, Right Audience to target, Right platform to focus and many more rights to ensure their video marketing campaign is on the right track. Since 2014, Vidooly is just doing the right thing and answering all these questions with the help of AI/ML (Artificial Intelligence & Machine Learning).

The above list clearly justifies the saying “Content is King” but you better ensure the King makes the noise at the right time.

Stay tuned for such awesome posts related to Indian Elections, IPL and yes of course the much anticipated Avengers End Game.

The list might have missed some brands doing an equally creative work around GOT. In such case do let us know about it in the comment section.

Deepika & Ranveer Starring In Lloyd’s New Campaign, Proves To Be A Hit

Storyselling Is Going To Rule Video In 2019