Apart from the content and the title of the video, a thumbnail forms an integral part that compels you to click. You may have invested a lot of time for the actual content like animation, scripting or audio effects, but if you can’t come up with a catchy thumbnail, you’ll be losing out on a lot of views. Thumbnails are equally important when it comes to social video. This article will focus on how you can change Facebook video thumbnail image to grab more views from your audience.

The first thing that pops up in mind when we talk about videos is YouTube. But you shouldn’t ignore Facebook as the social media platform has started stressing on videos a lot more now. As such, we are living in the era of social video, as views of branded video content have gone up by 99% on YouTube and a whopping 258% on Facebook between 2016 and 2017.

One should not forget that Facebook videos present a huge opportunity to make your brand visible in front of a highly targeted audience and enhance reach, engagement, and conversion. Statistically speaking, Facebook boasts of 2.27 billion monthly active users worldwide and 8 billion daily video views.

The concept of native videos is also a plus point on Facebook. It doesn’t need loading as it plays within the Facebook feed itself. Native Facebook videos are catching up as it presents a cleaner and a more user-friendly interface.

As a result, native videos on Facebook are becoming a rage. About 90% of profile pages are tapping into the power of native videos. The fact that Facebook is a social network plays a huge role as the videos receive more engagement than YouTube does.

Combine all this with the fact that the audience reacts better to video content than text, and you have a winner. Videos have a 1200% more likelihood of being shared than text or static images. Keeping all this in mind, Facebook has lately invested a lot of time and effort in making videos a core part of the experience.

Why are thumbnails important?

Thumbnails are the first thing you notice about a video or an image. A thumbnail is a small-sized version of an image or video that have been named so, as their size compares to that of a human thumb. The title of the video along with the thumbnail plays an important role in the video marketing strategy.

A catchy custom video thumbnail goes a long way in making sure that the viewer clicks through to your video. It gives a sneak-peek into the video’s content and gives the viewer an idea of what they are about to see. A great Facebook video thumbnail image will make your video content stand out amongst the others.

A Facebook video thumbnail image has a default size. Facebook also picks up certain images from within the video by default, for you to choose from for the thumbnail. But chances are that you might not like Facebook’s picks and you might want to change the image. Here’s your guide to do that.

Depending upon the size of your file, it will take somewhere around 30 seconds to 10 minutes for your video to be uploaded on Facebook. Once your upload is complete, a Facebook video image will be chosen by default to make things easier for you.

But often, the thumbnail may not be as “clickable” as you would like it to be. At times, default thumbnails are not even relevant to the content.

Go to the edit mode

Click on the particular video in the full-size mode to edit it. Go to the ‘Options’ tab in the bottom right corner. Next, choose the ‘Edit This Video’ option.

As you select the above option, you will be greeted with a number of ways to edit the video such as title, description and more. Jump to the ‘thumbnail’ section where Facebook will give you a total of 10 default thumbnails to choose from. If you find an appropriate one from the list, click on it and then select ‘Save’ to update the Facebook video thumbnail image.

If the 10 default thumbnail options do not appeal to you, Facebook has now come up with the option of uploading a customized thumbnail. You can update your older videos with customized thumbnails of your own or upload new ones in the upcoming videos you post on your profile. Simply, create the image beforehand and upload it by selecting ‘Add Image’ next to ‘Custom Image’ option. Here’s a screenshot of the same. 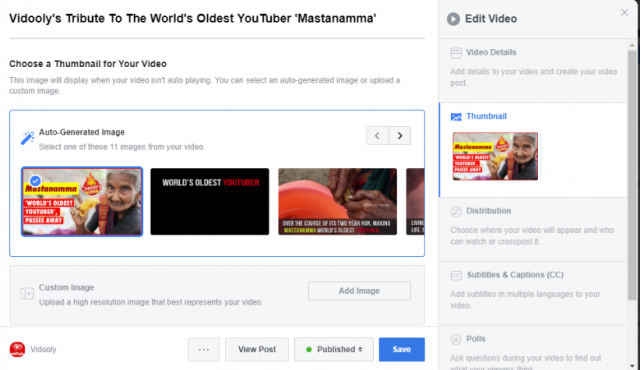 How To Insert Closed Captions (CC) To Facebook Videos?