Esports has become an essential part of the digital video ecosystem. It has gathered a bigger, wider range of audience gradually metamorphosing from its bewildering niche structure into the mainstream category. It will not be wrong if I mention Esports and gaming to be a cult in itself these days.

Over the last few years, there were brilliant shifts and changes that took place in the gaming world. Addition of advanced technology such as Augmented reality (AR), Virtual reality (VR) and AI-backed by the concepts of community building, real-virtual audience and overall enhancement of gamer experience has assisted in making it a USD 1059.3 million industry in 2020.

With the increase in awareness, exciting updates and new game launches into the market this will further grow into becoming the most desired successful social media product.

According to estimates of sources stated by Statista, the Global Esports and gaming industry’s market revenue will reach a total of 1.6 billion U.S. Dollars by 2023. While the majority of revenues collected by this industry comes from sponsorships & advertising, there is merchandise sale, media rights, publisher fees and tickets that make up for the rest counted.

Let us learn more about the Esports industry and individual gaming franchises from May 2020 onwards. Here we have data comparing what went hot and what was not!

The top three spots remained unmoved in the last two months i.e. April and May. Just Chatting topped the list in April with 5.9 million views by streaming for over 629.7k hours whereas surprisingly the proportion was opposite in May 2020. The same game topped it in May but got 7.6 million views by streaming for just 359.7k hours that is almost 42.8% fewer hours collecting some 20% more views. That means fewer hours of streaming got more views in the succeeding month.

League of Legends and Fortnight managed their 2nd and 3rd positions respectively in May with almost the same conditions as Just chatting.

Are you looking for a screen recorder that can record your game stream in HD and your commentary? Then Explore Fluvid! 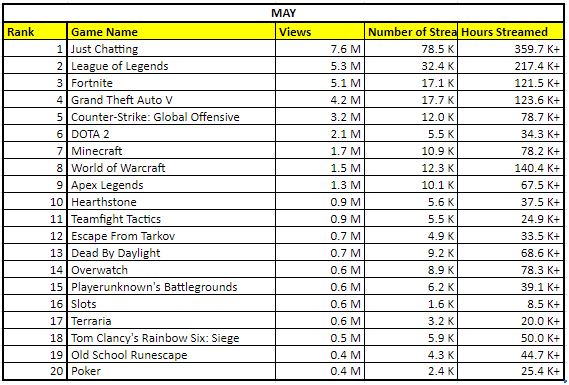 The list of 20 games ranked on the list for the month of May was found to have huge fluctuations and major shifts. While the first 4 spots remained unmoved with PUBG, Free Fire, Grand Theft Auto and Minecraft, it was Free Fire at a second position that performed better compared to its last month stats.

Free fire received over 305.5 million views in May which is higher than the +298.7 million in June. The other first, third and fourth rank holders had a reduced viewership and engagement but increased hours of streaming.

The fifth place was secured by Resident Evil this time with over 13.4 million views on it. It got around 9.3 million views last month thus rising from rank 9 on the previous month’s list.

Games like HULK, Granny’s escape and Human fall lost their top positions this month. Hulk with 6.2 million views in the month of May came down to the 10th position than the 7th place it secured last time.

Granny’s Escape saw a big shift in its ranking i.e. from rank 5 to rank 14. It got over 18.7 million views last month but managed to gather a mere +4.1 million views this time. The game was streamed for just over 8 hours in may whereas it was streamed for over 14 hours. There can be various distinct factors that have affected it.

Human fall came down to rank 15 with over 4.0 million views on its streams for over 184 hours that is very less compared to the numbers recorded against it last month.

Clash of clans made a one rank jump from 18th position to the 17th with 2.5 million views on it. Surprisingly, it got over 2.8 million views last month but stayed at a lesser rank comparatively.

Overall, there were five games displaced on the lists. The month of May saw new entrants into the list at 9th, 12th, 13th, 16th and 18th position and they were Roblox, Short life, Happy wheels, Delivery service and Batman on respective ranks.

In contrast to this, games namely Evil nun, Subnautica, Spiderman, Call of duty, and Assassin were out of the list. They gathered a good amount of views in June with hours of streaming and great engagement but were out of ranking this time. 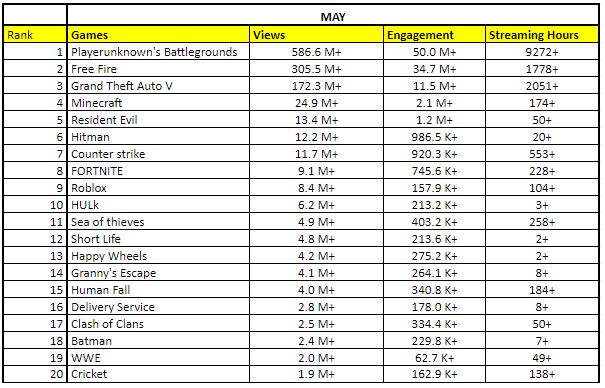 The Ultimate Guide To Video Marketing For Social Media