After continuous requests and feedback from regular Facebook users to add a “dislike” button for better expression, the team came up with five new emoticons. These are “Love”, “Haha”, “Wow”, “Sad”, “Angry”. These reactions improve user experience and sort out the regular human emotions which is usually confused online.

How about Liking a post with violence and domestic abuse?

Probably this is one strong reason why the platform designed additional Facebook reactions to help users channelize sentiments in an organised manner over posts. Moreover, it was time to look beyond the Like button because not everything on social media platforms are Like worthy. 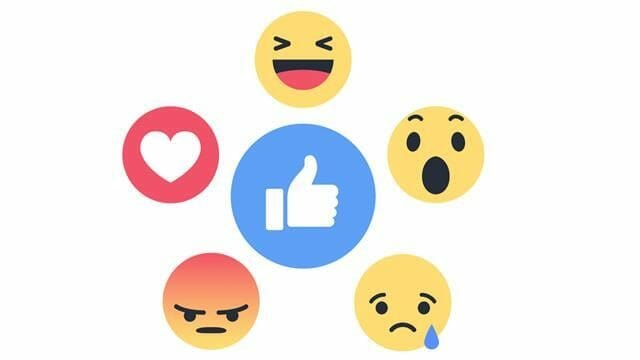 People needed other ways to express themselves online and commenting was not the appropriate solution to this problem. Teams worked on the project to develop options that could be universally understood and widely used on the social media platform.

These Facebook reactions are not simple graphical representation of emotions. They are graphics in motion. The animation thereby makes it more attractive and expressive.

After several iterations and changes, Facebook made 5 more additions to the conventional Like button. It functions the same way and has no complex feature behind it.

In order to select a particular emoticon, you can simply place your cursor or press and hold the Like button. The menu with all six options will appear and you can click on the reaction you want to put up at that post.

Facebook reactions were created by keeping two major points as targets and they are:

Keeping up with the demand from public over adding a “dislike” button along with the “like” button was not enough. It is because binary options such as the “like” and “dislike” can never suffice the requirement of displaying the plethora of human emotions which they encounter in regular life.

Adding on to the complicated Facebook algorithm, these reactions bring in huge difference to the social media platform. Facebook utilizes the reactions to keep the user’s feed in place.

Facebook gave a statement in one of its interview which we can quote here as,

“Over the past year we’ve found that if people leave a Reaction on a post, it is an even stronger signal that they’d want to see that type of post than if they left a Like on the post. So we are updating News Feed to weigh reactions a little more than Likes when taking into account how relevant the story is to each person.”

Facebook reactions are a key cursor in deciding over how a particular user account can appear. Therefore, brands and businesses must look out for the new updates as Facebook refines its codes and redesigns the algorithm.

Using the Facebook reactions gives a clear idea to the broadcaster/creator/brand about what their viewers are interested in thus ensuring good flow of content. It has a direct impact over the engagement rates as the insights can help users build a stable profile on the platform.

Developing a more empathetic Facebook experience for users was a wise choice on behalf of the company. It will continue to help users recognise what works online for their business and interests while engaging more people over posts.

The impact of the Facebook reactions is huge and as they continue to iterate software systems behind it, you should track ways to make more benefit out of them.

How to Add or Change Video Thumbnail on YouTube & Pro Tips