Video has been the most engaging form of content in Social media. Video content also has seen the most changes and updates for online video industry than any other form of content. Vertical videos which once were counted as low-quality video content, have now emerged as one of the most engaging video formats in online video platforms. From stories to native video posts and Facebook video ads, a Vertical video is ruling every video format in Facebook, clocking in maximum engagements and viewership compared to square and landscape format. Now with the launch of IGTV, I can definitely assure landscape videos would only be limited to movies and for television in the future. Vertical videos will rule all digital video formats.  Here is a Complete Facebook Vertical Video Guide for Beginners.

The growth of Social Media has fuelled the growth of e-commerce and m-commerce industry. But the maximum time spent by active internet users on the internet has been through mobile devices followed by desktop and tablet. Availability of affordable smartphones with better specifications has been the major reason for the growth of mobile audience and m-commerce. This along with better camera specifications which can capture high-quality video/image through smartphones has also fuelled the growth of video content (Vertical Videos) in the social media world surfed through mobile apps. 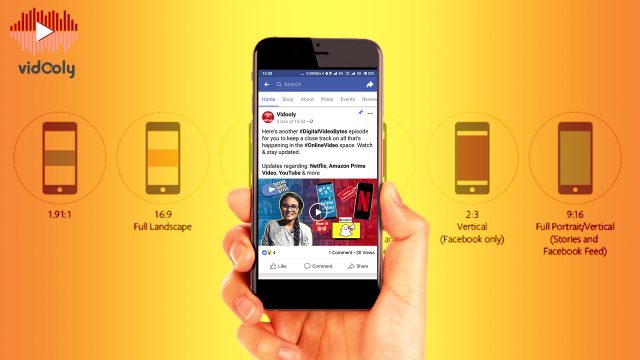 A mobile device is by default best suited for a vertical video viewing and vertical video shooting. Unlike initial days of camera phone when the quality of the camera was not up to the mark and vertical videos did not match the required quality and dimensions for mass scale viewing, the time has changed and some camera phones give better results than high-quality video cameras also. This along with the recent findings from a market research done by Facebook & Neilson which showed outstanding results supporting the growth of vertical video on Facebook.

79% of novice vertical video consumers agreed that vertical video is more engaging, while 65% of the respondents believed that brands using vertical videos are more innovative in their ads compared to landscape.

Another major reason for the growth of Facebook vertical videos has been the rise in demand for Facebook stories. Stories (Images, Text or Videos Active for 24 Hours Only) format was first started by Snapchat and was adopted by Instagram, Facebook & YouTube subsequently. Although it was started by Snapchat the maximum usage was seen on Instagram and this is where it became a hobby for every person in Social Media to add a story. With the dying organic reach of Facebook, stories are one way of staying connected with your followers as compared to other forms of posts. Facebook stories also have the maximum organic reach. Stories taught the millennials or whoever using this feature the art of vertical video viewing and vertical video shooting and from then 16:9 has been replaced by 9:16.

According to Facebook the reason for such sudden growth of vertical videos on Facebook has also been fuelled by scientific reasons. A vertical video helps viewers see the video with complete detailing as their eyelids move up & down in a vertical video as compared to a landscape video where the eyelids of viewers move left and right. In a mobile video, it is easy to direct eyes up and down rather than left to right and a vertical video utilizes the maximum space available + a vertical video also requires one action less, i.e no tilting of your phone screen to have a better viewing experience. This one less action helps in higher audience retention and therefore better engagement and higher viewership.

Apart from the recommended aspect ratio for creators working on Facebook Vertical Videos, here is a list of Tips or the best practices to be followed by creators focusing extensively on vertical videos on Facebook.

Video landscape was largely dominated by horizontal video experience through YouTube. Content creators, therefore, followed YouTube recommended sizes as the platform allowed monetization which doubled up as an earning opportunity for content creators. Instagram stories made people habituated with the art of vertical viewing and shooting and with the launch of IGTV on June’18, content creators have now started exploring this platform with 9:16 aspect ratio for vertical viewing. With Facebook video monetization launched globally, video content creators are expecting the same to be rolled out in IGTV soon and therefore the importance of vertical video viewing has gone up rapidly.

How To Remove Black Bars From Your YouTube Videos