2.38 billion active users on Facebook, that’s more than the population of many small countries combined.

Facebook might be getting slow with lower engagements and reach, much to the dismay of brands and content creators but still, their very existence in this platform is a must to market their own content and products to a wider audience. Amidst all these complains and chaos, many brands and content creators have found a hack to ensure their content reaches to the maximum active users on Facebook in any given time. This hack, ladies and gentleman is none other making the best use of Facebook Groups to build a community out of the already huge active user base of Facebook and drive engagements and viewership from it. In a major boost to all active Facebook community builders and Facebook group admins, the social media giant came up with a new feature of group video viewing namely Facebook Watch Party. In this blog, we will focus on this new feature from Facebook, which many digital pundits believe will drive the much-needed engagements and viewership for your video content that was long missing from it.

If you are wondering How is Facebook Watch party different from Facebook LIVE, then in simple words, Facebook LIVE is a new video captured in real time whereas watch party is a real-time screening of pre-recorded videos to create a shared viewing experience. 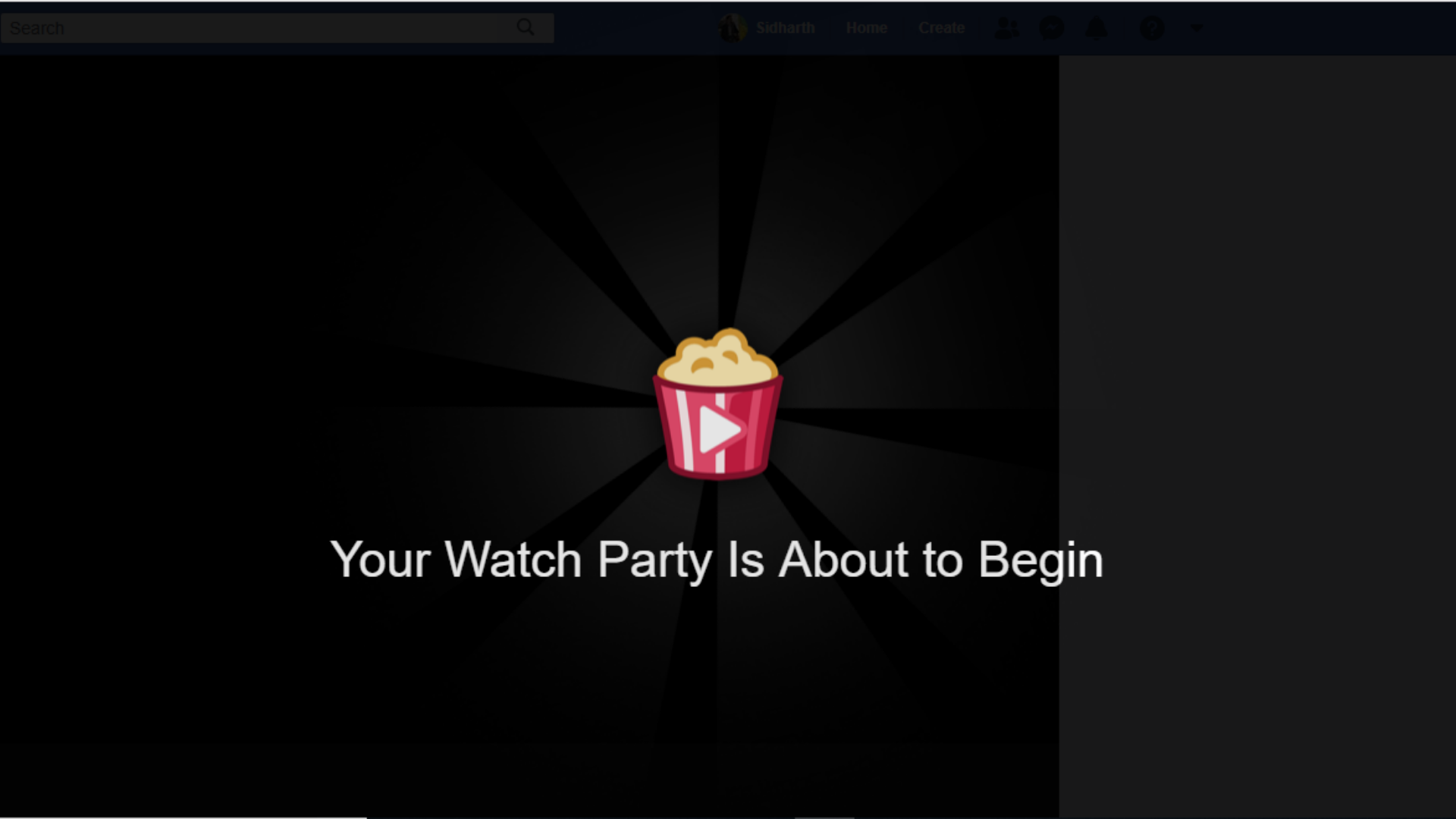 Facebook watch party allows Facebook group admins, Facebook profiles and Facebook page admins to start a real-time screening of pre-recorded videos or active FB Live streams. This feature enables group members, your friends & followers to view the videos playing in the watch party together along with live comments and reactions. This creates an online theatre experience or shared viewing experience thereby driving in more engagements. According to Facebook, engagements during a Facebook watch party is 8 times more than a native video post.

The feature was previously available only for Facebook group admins but has recently been extended to Facebook profiles and Facebook page admins. The California based social media giant believes, creating experiences through shared video viewing would drive a healthier form of online social interactions on their platform thereby encouraging more and more content creators and brands to use their platforms. 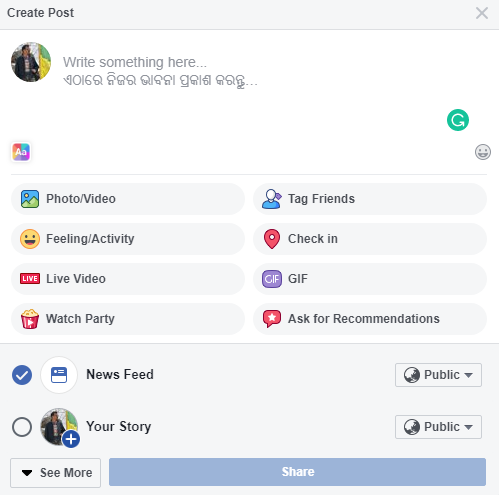 Adding a good post description/title to your Facebook watch party is a must to drive in more engagements and viewership.

Step2: After clicking on Watch Party button, a new window will appear with a list of videos and different tabs on top (Tabs: Search | Watched | LIVE | Saved | Suggested). Select the video of your choice by clicking on the Add to Queue button. You can also remove a queued video from the selection and add a new list of your choice. 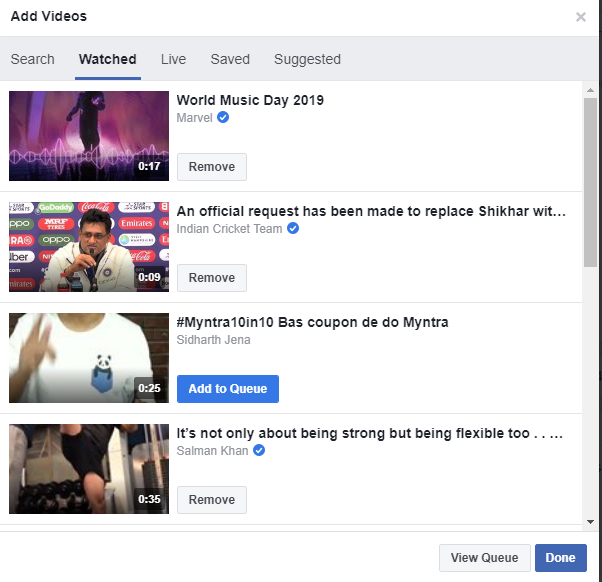 A page tab also appears in the window to help FB page admins add selective videos from their Facebook pages to the watch party. The video selection window also provides video search option (under the search tab) where watch party organizers can either search a particular video based on the title and description or search for a Facebook page and select a video uploaded on that particular page.

You can add videos to a watch party either by using the search option, Facebook page owned by you, video viewed in the past, Facebook LIVE streaming currently, saved videos and suggested videos based on your interests. You can also add video playlists to your watch party.

Engagements: To ensure the watch party is more interactive as it should be, encourage people to share their views in the comments section or share their reactions. Host or co-hosts can pin any comments to share valuable information during a FB watch party. 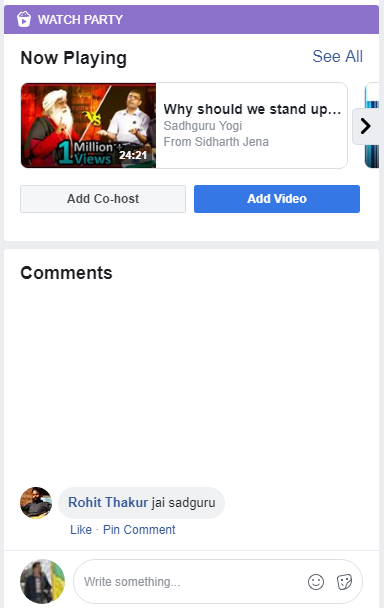 3) Video Source: Only videos uploaded on Facebook are eligible for a Facebook watch party. Videos from YouTube or any other OTT platforms are not eligible currently for a watch party.

4) Number of Videos: As of now there is no limitation on the number of videos that can be added to a Facebook watch party.

6) During a Facebook Watch Party: Entire control of the shared viewing experience through a Facebook watch party is controlled by a host and co-host. Actions like play, forward or rewind a video are only controlled by the hosts.

Digital video industry is growing leaps and bounds across all platforms. The first mover will always have the advantage of having the most number of creators loyal to their platform thereby ensuring more advertising revenue. This is where the fight between various video platforms is leading to innovations and new features, to drive in more engagements that would keep the content creators and viewers interested.

This is where Facebook has chipped in with watch party and so far the new feature has managed to live up to its expectations. Who knows this new feature would go on to become the future of real-time shared video viewing with your fans, friends, group members etc sitting miles away from each other.

How to Stream on Twitch for free : Ultimate Guide For Beginners