Virtual reality headsets, introduced about five years ago, have so far shown that there is a definite trend towards 360/180* videos where VR users can immerse themselves into a different world or some gameplay.

Since launching 360 videos on Facebook in 2015, Facebook Inc.’s Oculus stole the spotlight by mixing social media and 360* video experience together. With the help of this, creators, publishers, and advertisers were able to use this immersive format in many creative ways to interact and share stories with their followers on their Facebook page.

After the premiere of “Ready Player One,” the movie provided an extra boost to the sales of VR headsets as people all around the world were eager to escape into an alternative universe and experience something unique.

Capitalising with this rise in curiosity on Virtual Reality Headsets and 360 videos, Facebook just launched another great immersive format to help us tell our stories on Facebook in VR: 3D-180 Video format.

Facebook VR 3D-180 videos immerse your audience in scenes with a full 180-degree wide-angle view in News Feed and gain extra dimension with 3D depth when viewed in VR.

You can upload 3D-180 videos either through your FB Page via the video upload flow or through 360 Director for Profiles. Just upload your video and make sure to specify that the content should be treated as Side by Side Half Equirectangular.

Hit the download button, and you will see a progress bar at the bottom of the tool that your video is processing.

FYI: At this time, ads are not supported for 3D 180 video whether VOD or live.

At present, there are only two methods of sharing a 3D-180 Video to Facebook. These are

1. Ensure you have a camera that supports outputting video content in the proper format.

2. Ensure you have a laptop that supports Google Chrome and direct your browser to facebook.com/live/create.

3. You should see the displayed screen, where you can go to setting up Live events, 360/180 streams. From here you can click “Create Live Stream” to open the dialogue to specify what kind of stream you are preparing.

5. Select the checkbox for “Broadcast this as a spherical video.” In the drop-down that appears, choose 180 Video – 3D to specify that you are streaming a stereoscopic 180 video as a half equirectangular.

7. Ensure you select the most recent stream key value.

8. From here, look at your stream key and server URL values to get the settings you will feed into your streaming software/live video workflow.

9. Once you start streaming to the server URL and stream key, you should see the loading screen, and the video should load and be previewed.

FINAL STEP: You just need to hit Go Live which only is available when a valid video stream is received and the video will publish to your audience.

1. Make sure you have an existing page that you want to upload to

2. Select the option to upload a video or a photo, either right from your Page’s Feed or through your Video Library in Publishing Tools. 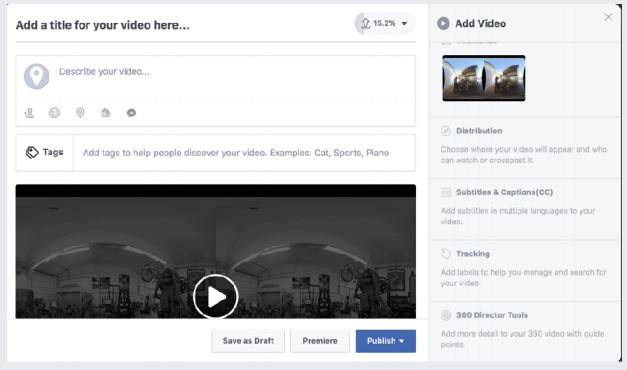 3. Scroll down on the right side until you see 360 Director Tools in the menu and select it.

4. Select 360 mode inside the tools if your asset does not already have metadata indicating it is an immersive video like a 360 video or a 3D-180 video.

“If you have metadata, it should already display the following screens on its own and not require manual setting of the parameters for projection and stereo mode” 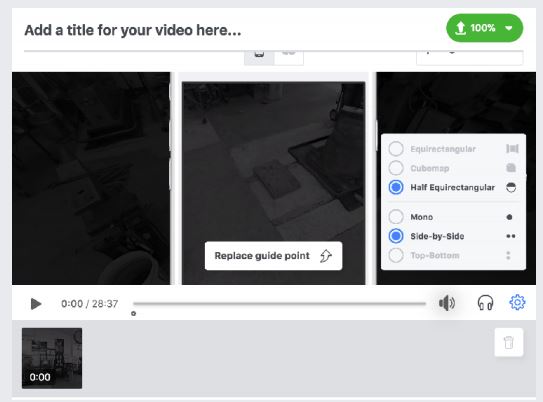 5. Hovering over the gear icon should reveal some options to determine what kind of video file your video is. Select Side-by-Side and Half Equirectangular.

FINAL STEP: Confirm that your video is ready to be published once you’ve added a title, description and determined the distribution methods. Once you’re happy with all the settings, hit ‘Publish’ and wait for your video to finish processing. You’ll receive a notification once your video is live on your Page.

What are the formats supported for Facebook VR: 3D-180 Videos?