With the launch of UCypher, India’s first major eSports league, the interest of Indian gaming community has grown drastically in favor of pro gaming tournaments.

eSports (Electronic Sports) is a form of competition held on specific multiplayer online video games that have team-based elements, such as Fortnite and League of Legends, or single player based strategy games like Hearthstone. The gamers who play eSports are highly talented and often fight for $500,000 to $5 million tournament prize.

Indian eSports tournaments like Tesseract League, North East eSports Championship, ESL India Premiership among others have already paid out more than INR 2 crores (USD 308,000 approx) as prize money in 2017 and is expected to grow more.

With a significant growth among homegrown online gamers who are competing eSports on international and national tournaments, analytics becomes a crucial factor to evaluate their gaming performance on various platforms like Twitch and Mixer. 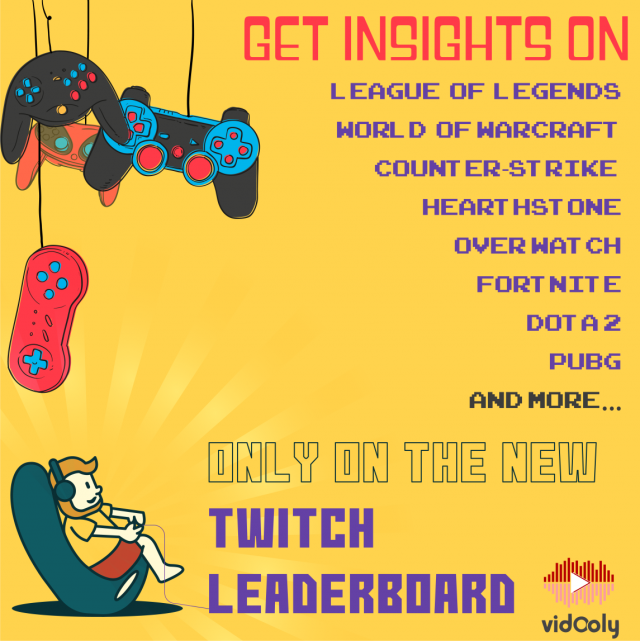 For an Analytics based company like us, we’ve always had faith in building products that can increase the value of gamers and help them better their online gaming performance by providing eSports analytics on players and games they play.

This is why Vidooly is launching a fully-fledged Twitch analytics leaderboard for everyone who wants to understand the gaming landscape on Twitch. Even if you’re a sponsor or a brand looking to tap into this community or an advertiser looking to connect with the right gaming publishers, then you can use Vidooly’s leaderboard & custom eSports analytics effectively.

WHY IS TWITCH THE MOST PREFERRED PLATFORM FOR ESPORTS GAMERS?

If you’re involved in gaming or watched others play PS4 online, you probably have an account on Twitch. It’s the place that can make the dream of many video gamers become a reality: making money by playing games.

There’s a difference between playing video games and being a gamer. Almost everyone has played video games in their life, but there’s a select few who have gaming in their blood and are about as hardcore as it gets.

You don’t have to be an eSports addict to be a hardcore gamer. But, if you are an eSports player, then it’s obvious that you have a large number of followers with good average lifetime viewership on your Twitch channel.

This is because Twitch is the only platform that allows gamers to immerse themselves in their passion. Twitch approaches content in ways that empower its viewers and deliver an experience that can be engaging for seemingly endless periods of time.

HOW DO YOU KNOW WHO IS THE BEST PERFORMING GAMER ON TWITCH?

The other component of Twitch—the player streams—allows viewers to watch individuals play games and, in most cases, see a Skype-like video of the player along with the stream. In addition to the streams, Twitch offers a chat-room experience that allows the community to interact with the streamer and with each other in real time.

Any Twitch user will get to share ad revenue that your channel makes with Twitch. In your Broadcast Dashboard, you can change the settings on your channel to reflect how many ads you want to play per hour during your video stream (usually three ads).

The advertising revenue generated by visitors to channels viewing and clicking on ads will be shared between the gamer and Twitch and paid out by Twitch to your PayPal account. 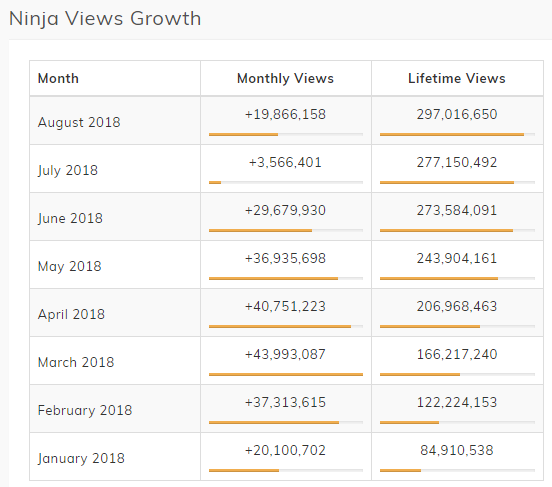 Other than these usual channel monetization methods, a Twitch gamer can get game publishers/developers who will pay you to play, brand sponsorship offers and fans donations. And once you have an established brand and a sizable following, you can also compete and qualify for eSports games and win prizes.

Getting paid for playing a game is the best possible scenario any gamer can imagine. And all this is possible just by making an account on Twitch.

This is the reason why our first step towards eSports was to analyze the gaming platform with the highest number of gamers.

MOST POPULAR GAMES ON TWITCH:

By 2018, Twitch accounted for 82 percent of total viewership across the combined top 20 games on both video platforms, with Twitch having the most viewers for almost every game. You can expect nearly a million people watching Twitch at any given point now.

As Twitch streamers are always on the lookout for the latest and popular games which they can broadcast on their channels, there is a need for a dashboard that lists top viewed games that Twitch’s gamers are playing.

Using Vidooly’s Twitch analytics leaderboard, anyone can find the most popular games every month and by their lifetime viewership.

GET DETAILED ESPORTS ANALYTICS ON EVERY GAME

Using Vidooly’s eSports analytics leaderboard, you can get seven different insights that you will never get anywhere. Following are the types of insights you will get when you click any game on our Leaderboard.

The information mentioned above is compiled and curated just for everyone who is interested in eSports and gaming culture.

As the online gaming industry continues to grow in terms of participants and market in recent years, the need for eSports and gaming platform analytics is equally imperative.

By providing eSports analytics leaderboard, Vidooly has analyzed data of more than 100 thousand Gamers & 2 thousand Games. If you want to understand the various opportunities to reach consumers via eSports, looking for data on publishers across platforms/ genres in the eSports environment and connect with the right content creators in the eSports industry through data-driven analysis, then do let us know by contacting us.