The world of YouTube is not complete without a controversy. This can be about a father forcing his kids to vlog daily and earn monetization money, or a prankster killing himself accidentally just for the sake of a YouTube video. Usually, a successful YouTube video is not a viral story unless it’s part of creative brainstorming which provides something new that their audience never saw.

But in this situation, experiences that don’t become content is what Logan Paul is looking for his next video. It’s because, for his latest vlog, Logan Paul uploaded a video showing the body of an apparent suicide victim on YouTube in Japan’s Aokigahara forest which is also known as Japanese Suicide Forest. A video which he deleted afterward and apologized for uploading it, claiming he was trying to raise awareness of suicide.

When Keeping It Real Goes Wrong

As we all know, that Logan Paul’s daily vlogging gospel bought him money and the influence that almost every YouTuber with more than 1 million subscriber base have. But the sheer amount of stupidity dumped on his vlogging YouTube channel is what made him the “special kind” supporting his own entourage of teenage white kids.

The video was uploaded under the title “We found a dead body in the Japanese Suicide Forest…” and starts with a viewer discretion warning to Paul’s 15 million-plus subscribers which shows no reason to slow down. Throughout the deleted video, you can see Paul trailing around with his friends trying to decode the fact “Is the Japanese Suicide Forest a real thing?” while you can see his entourage preparing to spend the night in the forest.

The 15-minute video is largely indistinguishable from the rest of Paul’s YouTube uploads, and was intended to be part three of his “Tokyo Adventures.” After six minutes in the video, the video cuts to footage of a body hanging from a rope under a tree, filmed at a distance.

Still standing there, feet from the body of an apparent suicide victim, Logan tells his viewers that “we came here with an intent to focus on the haunted aspect of the forest, this just became very real and obviously a lot of people are going through a lot of s— in their lives.” Thus to summarize the video that he deleted, Paul basically made fun of the Suicide Victim on YouTube.

Where is this Japanese Suicide Forest?

Aokigahara is a forest on the slopes of Mt. Fuji in Japan also known as the “suicide forest” for its status as a site of hundreds of suicides. Japan has a relatively high suicide rate compared to other countries, but the number of suicides is declining by 2016. But still, Japan’s suicide rate is the sixth highest in the world and the second worst among eight major industrialized nations.

The Breaking Bad actor was very unsettled by Logan’s actions.

How dare you! You disgust me. I can’t believe that so many young people look up to you. So sad. Hopefully this latest video woke them up. You are pure trash. Plain and simple. Suicide is not a joke. Go rot in hell.

Game of Throne actress Sophie Turner tweeted right at Logan, calling him an idiot for what he’s done.

Many other YouTube stars have taken to Twitter to voice their disgust against Logan Paul. Here is YouTube’s fan favorite Casey Naistat. 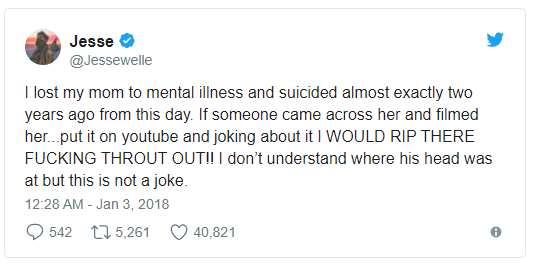 I just received an official statement from a contact at @Youtube regarding the outrage and controversy around Logan Paul’s (now self-removed) “We found a dead body” top trending Youtube video.

I’ll save my personal comment for later. Just wanted to pass this along. pic.twitter.com/JNTQDMVvT4

Logan Paul started his career a member of the Internet video sharing service Vine. He was one of the leading Vine stars who used to live with fellow social media celebrities like Amanda Cerny, Juanpa Zurita, and Andrew Bachelor, who collaborated with one another on their videos.

Now, outside the world of 6-second gags, Logan Paul is insanely popular among his young demographics. You have to remember that by the time the video was removed, there were more than 600,000 likes on it. This proves that his “young fanbase” doesn’t care if their icon is laughing at dead bodies.

As per our Market Research Tool, we were able to find out the exact demographics.

These You Tubers earn millions of monetization money just by creating content that violates personal space of other people. Do you think that showing the footage of Suicide Victim on YouTube and making fun of it in front of his 15 million huge YouTube fan base is a good approach to spread Suicide awareness?