With about 3 billion accounts on the platform, Twitter is one of the most popular social networking platforms in the world. It has about 330 million monthly users and insights from 83% of the world’s leaders. The concept of tweets has lead to constant outpouring of strong opinions on the platforms along with the extensive usage of hashtags.

Despite the restricted video upload length of 140 seconds, individuals and brands are natively uploading video content on Twitter. It is reported that videos are 6X more likely to be retweeted than photos and 3X more likely than GIFs. Therefore while experimenting with Twitter video it is important to keep track of the various Twitter video metrics in order to benchmark your campaigns. Here are the six important metrics that you need to keep in mind. 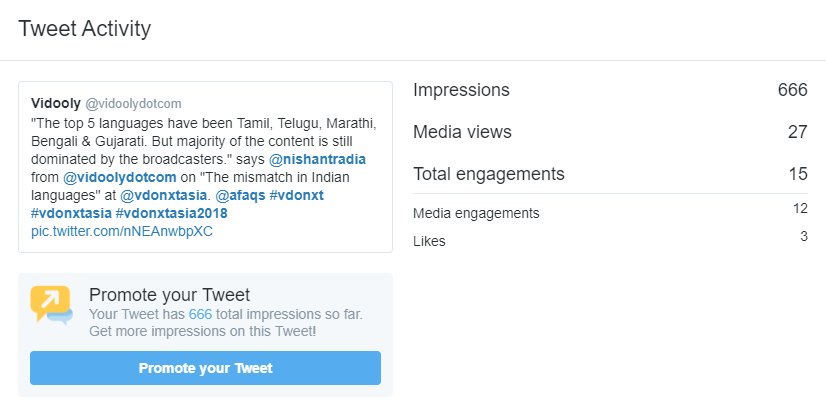 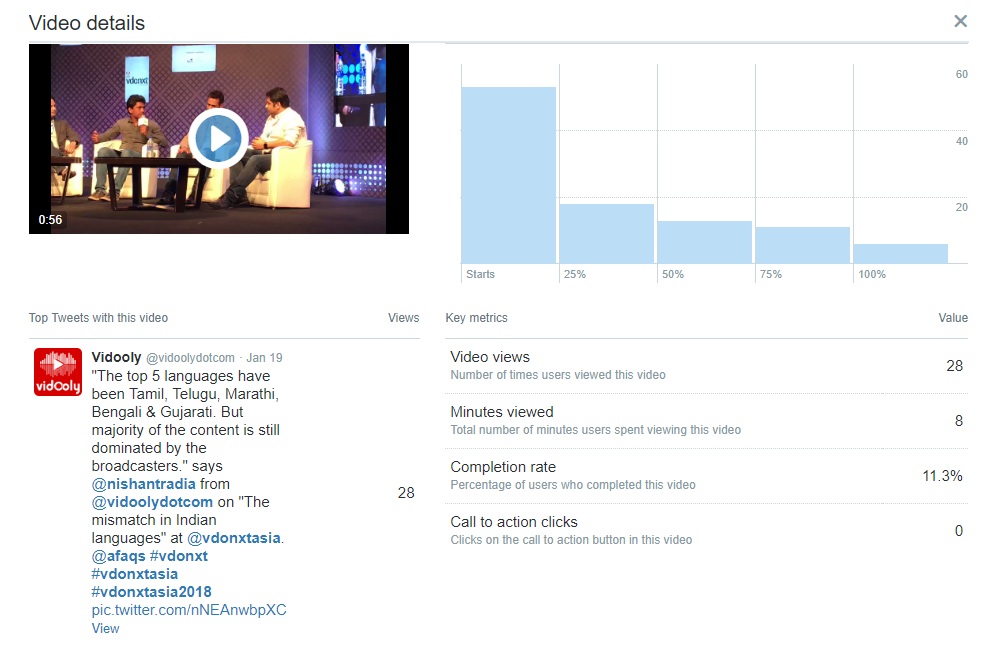 First and foremost it is important to understand what counts as Twitter video view. Anything that has been viewed for three second or more is counted as a video view. But like all other social media platforms, this view count is not shown to the public, it is only available to the account owner in the analytics section. Also, unlike Facebook, it does not provide a separate count of 10 second views. Video views is a general metric to understand how successful your Twitter video has been since it’s upload.

Another important video metric that is provided by most social media platforms supporting video content is Impressions. On Twitter video, Impressions simply means the number of times the Tweet containing the particular video has been viewed on the Twitter feed. This metric gives a fair idea of the reach that a Twitter video tweet has across the platform. It is important to understand here that every impression will not convert into a video view because the tweet simply showing up on the feed doesn’t mean that it has been viewed.

In order to further dig down on your Twitter video performance, the Minutes Viewed metric comes in handy. This Twitter video metric allows you to see the total number of minutes your audience has spent to view the video. While the Video Views metric only lets you know the total number of people who viewed the video for three seconds or more, this metric gets more specific as to how much of the video has been viewed.

Another important metric to further understand the performance of a Twitter video is the Completion Rate. The Twitter video metric basically shows you the percentage of people who completed viewing the entire video. This means that the Video View metric is just the superficial data of people who may or may not have viewed the entire video. To understand whether the audience really resonated with your video, it’s important to track this Completion Rate metric. In other words, this metric throughs light on how well your audience has been retained.

Every marketer today puts more weightage on the engagement element of their posts more than anything else because that’s what truly shows the success of what you showcased to your audience. Similarly, on Twitter in order to know the total amount of engagements that happened with a Twitter video tweet, it provides the Total Engagements Twitter video metric. This metric is a summation of Media Engagements (i.e. the number of clicks on your media) and number of Likes on that video tweet. s

When you upload a Twitter video, the platform gives you an option to add a Call-To-Action to it in the form of a button. Therefore, when you do use that feature, it is important to also track it. The Call-To-Action Clicks Twitter video metric is something which shows the number of clicks on the button of this video. This metric is important when marketers want to compare results of their video campaigns on Twitter.

Now that you know what the important Twitter video metrics are, it is also necessary to know where to find them. There are two ways to do that: One is go to the specific video Tweet and click on ‘View Tweet Activity’ icon which is on the bar just below the video. Here you will find metrics like Impressions, Views and Total Engagements. To find the other remaining metrics you need to go to the Analytics page of Twitter and click on ‘More’. There you will find the ‘Video’ option in the drop-down menu. Once you go there, select the time period your video Tweet was made in and click on the ‘View Video Details’ button that is right below the video tweet. Here you will see the other metrics like Minutes Viewed, Completion Rate and Call-to-Action Clicks.

So go ahead and start tracking these Twitter video metrics to benchmark your video campaigns properly.

Hacked YouTubers, And What to do When your YouTube Channel is Hacked