In January, internet mammoth Google had revealed that the company will unveil a Political ads Library that will ensure higher transparency to election ads posted online. As promised, Google’s Transparency Report has recently been released and gives a breakdown of political advertising on Google which includes the amount spent by political parties, candidates and members of the Lok Sabha who have purchased online ads on its platform as well as partner platforms such as YouTube.

When it comes to Indian states, Andhra Pradesh spent the maximum on political advertising on Google. Coincidentally, Andhra Pradesh goes to polls in the first leg of the election on April 11th and has spent ₹4.88 Crore so far. Telangana is next in line for political advertising on Google as it spent ₹1.75 crore followed by Uttar Pradesh which has spent ₹30.7 lakhs and Maharashtra (₹27.7 lakhs).

Below is an overall view of the expenditure on political advertising on Google in the Indian states. 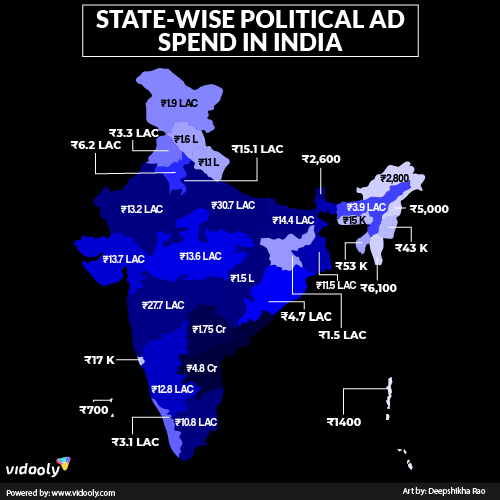 The BJP has been mainly focusing on the national campaign called ‘Main Bhi Chowkidar’ and has executed around 25 ads for that cost them over ₹2.5 lakh each. The next slab for the BJP was  ₹1.25-₹2.5 lakh under which the party ran 10 advertisements and three of them were video ads.

‘Phir ek baar Modi Sarkar’ has become a major campaign under which 200 ads were executed falling under the bracket of ₹2,500 to ₹1.25 lakh out of which only 21 were video ads. A lot of them are image ads that have slogans rhyming with ‘Phir ek baar Modi Sarkar’. The cheapest of the lot were 136 ads that were circulated at the expense of ₹250-₹2500 per ad. Almost half of these were image ads.

The Indian National Congress, on the other hand, spent ₹11.6 lakhs on political advertising on Google. The ads were a mix of images and videos mainly focussing on the ‘Congress Will Deliver’ campaign, the Hindi version of which is ‘Hum Nibhayenge’. Some of the earlier ad campaigns comprised of the Congress manifesto with Rahul Gandhi’s face on the ad creative along with a promise that the Congress intends to live up to. The maximum that the party has spent on an ad is ₹1.25 lakhsas there are no ads in the above ₹2.5 lakhs or in the ₹1.25-₹2.5 lakh brackets.