There was a time when vertical video was looked down upon in terms of quality and professionalism. But now the scenario is quite opposite! Vertical video is on the rise and it is revolutionizing the way we consume social video. Be it Snapchat, Instagram or Facebook the trend of vertical videos is catching up fast.

Snapchat has especially played a huge role in the rise of vertical video. Snapchat boasts of more than 10 billion video views daily and 400 million snapchat stories created everyday! It has been at the forefront of the vertical video revolution while other social networks have followed through. So, let’s get to know more about Snapchat vertical video and what marketers should know.

The rise of vertical video

Vertical video is everywhere now! Consumer preferences have changed mostly because of the advent of smartphones. We no longer want to tilt our phones horizontally anymore. Research suggests that we tend to hold our phones vertically 94% of the time. So, next time you want to capture that live action at the concert of your favourite band, you’ll probably catch yourself holding your phone vertically.

Snapchat was, in fact, the first platform to take note of the new generation’s inclination towards vertical video. In 2016, Snapchat introduced the first ever vertical video program called Snap Ads. The social media giant noticed that it drove 5 times higher engagement in terms of “swipe-ups” as against the click-through rates of other mobile ads. 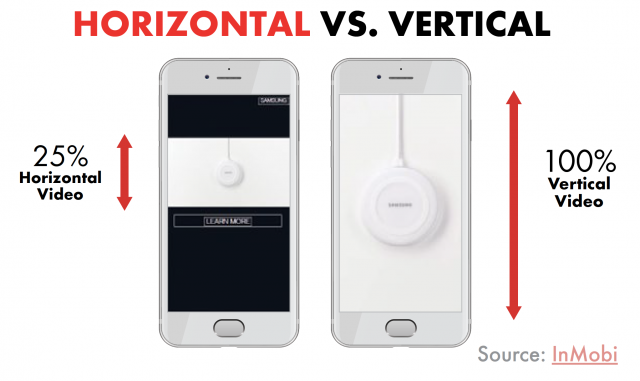 Snapchat’s move was just the beginning as soon after, Facebook integrated vertical video ads on its platform. Instagram came up with “stories” (which are quite popular now), which was an exact replica of Snapchat’s feature that enabled users to add snaps that lasted only for 24 hours. Now, you can see vertical videos all over Instagram stories whether they are your friends’ posts or sponsored video ads by brands.

To go the vertical way or not…?

The vertical video format has both sides of the coin to it. It’s a bit of a challenge for brands to completely repurpose their video marketing strategy to accommodate vertical videos. Moreover, vertical video needs a more refined take and a laser-sharp focus to communicate in short bursts of time (vertical videos are most effective for social media “stories”). It has to be effective and to-the-point.

On the other hand, as most smartphone users go the “vertical way” as they hold their phones, these videos offer immediacy and catch attention instantly on the go. They are interactive and can strike a chord with the young audience as they prefer quick delivery of content in short bursts of time.

Despite the challenges, brands now don’t have an option but to adapt to the new format. Snapchat has been quite vocal about this phenomenon and has been excited to see other brands follow through the trend that it started. It’s no more about “Why vertical video?”. It’s more about how creative you can get with vertical storytelling and create an impact? Brands have to intricately chart out the vertical video strategy for each social media platform and create a unique strategy to succeed. With this, let’s explore the world of Snapchat vertical video in greater detail.

Snapchat has become the younger generation’s choice of video sharing platform. With 301 million monthly active users, it presents a robust platform for stories, posts and video ads alike. Snapchat’s uniqueness lies in its transience. This means that once you’ve sent out a snap, you can’t take back that action and also once you view a snap uploaded by your friend, you can’t go back to it. Snapchat thrives on its spontaneity that is a hit with its users.

Let’s understand the nuances of Snapchat vertical video according to the different formats.

This is the most popular Snapchat vertical video ad format which is considered the best-in-class when it comes to mobile video ads. These snap ads appear as 10-second, vertical, full-screen video format. Snapchatters can swipe up at any point within the video to access something more – be it a longer video, a blog, a website, or an app installation.

These are the guidelines you need to remember.

1080 x 1920 is the prescribed dimension.
9:16 is the desired aspect ratio.
32MB should be your max file size.
.MP4 and .MOV. are the accepted video formats.
Videos will range from anything between 3 seconds to 10 seconds in terms of length.

Below are the guidelines you need to remember.

1080 x 1920 is the prescribed dimension.
9:16 or 16:9 are the desired aspect ratio.
1GB should be your max file size.
.MP4 and .MOV. are the accepted video formats.
Videos should be at least 15 seconds long with no bar on maximum length.

Taco Bell laid down the perfect example of a successful vertical video ad campaign on Snapchat when it launched the sponsored lens campaign. It broke records as it generated 224 million views within a single day. The campaign was live only for a day in the US within which it became the most viewed Snapchat Lens.

As smartphones become ubiquitous, video viewing on mobile will only rise. As that happens, the demand for well-crafted vertical videos on social media will grow. Snapchat vertical video is at the forefront of this trend while it goes on capturing the audience’s attention in the portrait mode. Advertisers should also not ignore this trend as there are more exciting opportunities in vertical video viewing not just in Snapchat, but in other social media platforms alike.

Things You Need To Know About Creating Sponsored Content