One of the very first internet communities to fully adopt the live streaming format was the gaming community. Considering that this community includes truly engaged users and provides a shared experience (even if you are not participating in it), live streaming has become a huge part of its evolution.

The Amazon-owned platform Twitch has only been around for five years but has certainly managed to attract a loyal audience base, consisting of both streamers and viewers, all under the radar of the mainstream social media platforms. Although the platform is considered to be niche, every day millions of people gather there to watch and talk about their shared interests.

As a result of that, Twitch streamers are always on the lookout for the latest and popular games which they can broadcast on their channels. After all, the platforms is a “gamer’s retreat” and now if you’re planning to become a streamer, or simply want to know which games are popular right now, we have compiled a list of the top 10 most Popular games on Twitch as per views in August 2018. 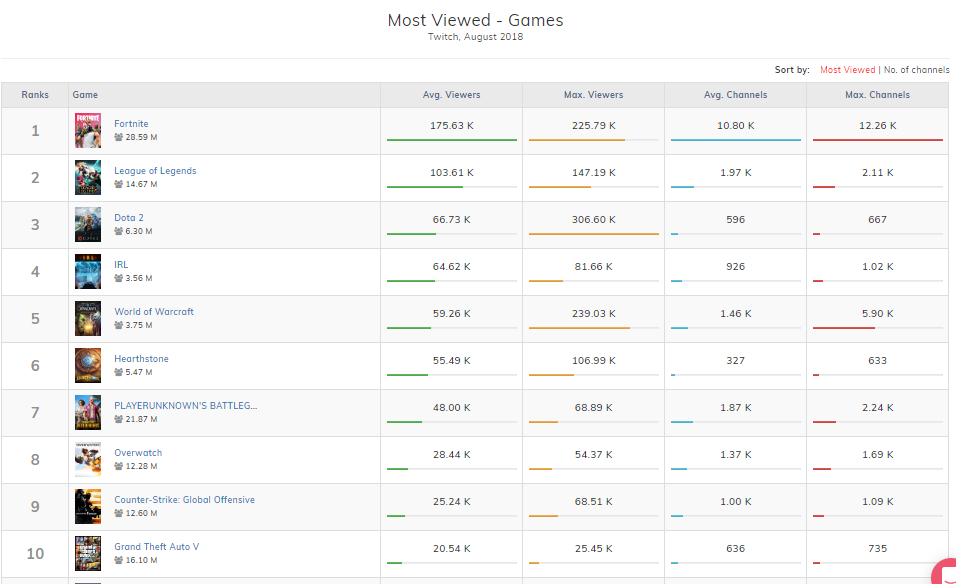 Ever since this game launched last year, it has been a hot topic in the gaming community so much so that it has been constantly dominating the gaming industry beating the other popular games such as  CS: GO, Overwatch, League of Legends, and its main rival, PUBG. This massive popularity has given rise to a lot of successful streamers on Twitch who specifically focus on this game for their broadcasts. With more than 175.6K average views, Fortnite stands on the first spot of the top 10 most Popular games on Twitch in August 2018.

The game is free to play, although buying the game grants you access to the player VS environment mode titled “Save the World”. It can be played as a single or multiplayer with the maximum number being four. But the other “Fortnite Battle Royal” mode supports up to one hundred players. The basic storyline of the game is that it is set in a hypothetical scenario where Earth’s 98% of the population has been destroyed due to a storm and the remaining population has to build fortifications in order to survive and stay clear off the storm.

This game has been around for about a decade and has managed to maintain it’s standards and popularity quite well over the years. The gaming community has explored this game very well and has given rise to various streamers doing dedicated broadcasts on Twitch. It is a MOBA or multiplayer online battle arena game, developed by Riot Games, and available for Microsoft Windows and macOS. With more than 103.6K average views, League Of Legends stands on the second spot of the top 10 most Popular games on Twitch in August 2018.

This online game is basically a battle arena where you fight with other players or the game’s artificial intelligence. While playing the game, the player takes the role of the “summoner” that controls the “champion”. The player will be leading a champion into a battle (which lasts from 20 to 60 minutes) and the goal is to destroy the opponent’s core building called Nexus. The game has three different maps that have different objectives and win conditions. Each match in the game is discrete, with all champions starting off fairly weak but increasing in strength by accumulating items and experience over the course of the game.

The DotA gaming universe is one of the all-time favorites of the gaming community worldwide. Millions of players worldwide engage in DotA battles daily and with the Dota 2 launch in 2013, there are tons of new things to do for all its lovers. As the name suggests, Dota2 is a stand-alone sequel to the DotA, a mod developed by the community for the “Warcraft III: Reign of Chaos”. The game was developed and published by Valve Corporation and it can be played for OS X, Linux or Windows OS. With more than 66.7K average views, DotA stands on the third spot of the top 10 most Popular games on Twitch in August 2018.

The game matches feature 2 teams (called Radiant and Dire) of 5 players that occupy and defend their base, and the winner is the team that manages to destroy a large structure known as “The Ancient” in the other team’s base. The hero character controlled by each player has a unique set of abilities with different playing styles. The game has been praised for its rewarding gameplay, production quality, and faithfulness to its predecessor, with multiple gaming publications and eventually considering it to be one of the greatest video games of all time.

Although the Twitch is a major attraction to gamers, it’s not limited to just that in any way. The platform is meant for passionate people of all types who want to express and be heard. It accommodates both gamers and non-gamers. IRL is an acronym for “In Real Life” which lets people broadcast moments from their lives as part of gameplay.

Streamers are able to create a broadcast that covers virtually any topic that you can think of. With more than 64.6K average views, IRL gameplay stands on the fourth spot of the top 10 most Popular games on Twitch in August 2018. The Twitch community loves unique personalities, which is why it is not at all surprising that IRL live streams have attracted such a large audience and is competing against some of the finest games out there.

World of Warcraft or WoW for short is an MMORPG (massively multiplayer online role-playing game) which was developed by Blizzard Entertainment and released in 2004. This is the fourth game set of the series that takes place in the Warcraft universe on the world called Azeroth. It remains widely popular among the gaming industry even today and considered to be probably one of the most popular video game franchises ever created. With more than 59.2K average views, World Of Warcraft stands on the fifth spot of the top 10 most Popular games on Twitch in August 2018.

It is an online role-playing game where the players control an avatar and use it to explore the lands, fight against monsters, play with others and complete on various quests. The game has a free trial version which allows players to go up till level twenty and to further unlock the features, there’s a subscription version available. The game can be played in four different realms so you can choose if you want to play against other players or versus the environment.

This game was developed and published by Blizzard as a free online card game and was released for Microsoft Windows, macOS, Android, iOS in 2014. It has a good reputation of being one of the easiest games to learn which is based on a fun and fast-paced strategy that’s free to play. Despite its relatively short time in the gaming industry, it has managed to produce some great streamers playing Hearthstone on Twitch.

With more than 55.4K average views, Hearthstone stands on the sixth spot of the top 10 most Popular games on Twitch in August 2018. Players can compete with other players, as the game features two opponents with a deck of 30 cards and a hero with a selected and unique power. Players can use their cards to command the heroes, summon creatures, sling spells and have an epic duel of strategy.

PUBG has been one of the most talked about games ever since its release in December 2017. Considering that online battle arena games are pretty much the center of the gaming industry today, the massive amount of attention that this game is getting on platforms like Twitch is totally understandable. With more than 48K average views, PlayerUnknown’s BattleGrounds stands on the seventh spot of the top 10 most Popular games on Twitch in August 2018.

This is yet another typical arena game which has a gameplay accommodating up to a hundred players all parachuted to a remote island where they fight for survival. You can play the game alone or in teams that include up to four players. The last man standing wins the round, and in between matches of each round, you can use the in-game currency to buy weapons and other items.

With more than 28.4K average views, Overwatch stands on the eight spot of the top 10 most Popular games on Twitch in August 2018. The players of this first-person shooter video game are divided into two teams of six players and each player can choose from twenty different characters. The goal is to work together as a team to complete a mission successfully. Tasks may vary from securing a base to escorting a payload across the map.

Counter-Strike: Global Offensive or CS: GO is an FPS game that expands on the map of the worldly popular game Counter-Strike launched near about two decades ago. It is the fourth game in the series and still retains the feel of the original game with a lot more features, characters, maps, and weapons.

With more than 25.2K average views, CS: GO stands on the ninth spot of the top 10 most Popular games on Twitch in August 2018. The gameplay of this first-person shooter game is fairly simple because players can either be on Terrorist or Anti-Terrorist teams, that fight against each other until elimination. The game also has specific tasks, like planting a bomb or freeing hostages from captivity.

This game was published by Rockstar Games and released in 2013 which is available for PC, PlayStation4, PlayStation3, Xbox One, Xbox 360. All of the games in the Grand Theft Auto series enjoy a cult status since each of them is highly praised by the gaming community. With more than 20.5K average views, Grand Theft Auto V stands on the last spot of the top 10 most Popular games on Twitch in August 2018.

It is an action-adventure game with gameplay that’s based on missions, a lot of storytelling, open world adventures and an option to play the online multiplayer mode. The game can either be played from the first or the third person, and you can either explore the fictional city of Los Santos or go on heist-based missions. The best part is that you can roam around the game and spend hours doing all kinds of crazy things.

With new games being released every now and then, this ranking of top games is bound to fluctuate very often and we are on the lookout for them to gather insights on it. Tell us which is your favorite game to stream or watch on Twitch. 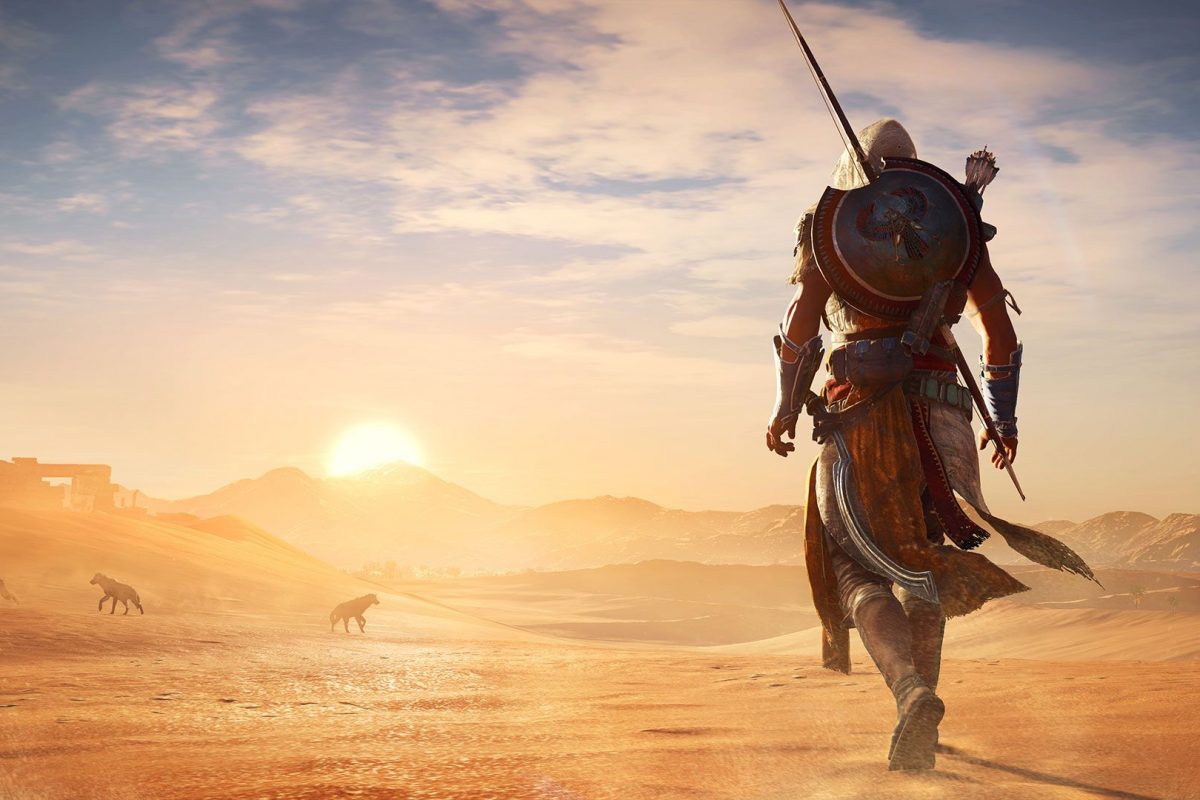