Each day, video content is being consumed with vigour! People are generating billions of views and watching billions of hours of content on the video-sharing platform. But there are some content categories that rule the audience’s hearts and minds more than the others. You must have come across various categories of video content such as unboxing, product reviews, music, DIYs, and much more. As the new year begins, let us find out the top 10 categories on YouTube 2018 in India that were a hit with the Indian audience.

Here’s a glimpse into the top Indian categories on YouTube in 2018. 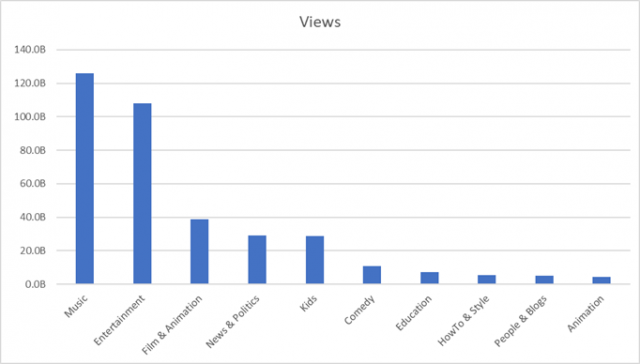 Bollywood music is voraciously consumed by the Indian audience! That can be seen in YouTube videos as well. As we did a roundup of the top 10 YouTube channels of 2018, it came as a no-brainer that the top spot was being held by a music channel. According to Vidooly’s latest statistics, Music has garnered 126.02 billion views in the year 2018. Out of the top 10 YouTube channels of 2018, a whopping 7 are music channels itself. T-Series, Zee Music, Sony Music India are some of the popular channels on this list.

With 107.9 billion views, Entertainment was the second most popular YouTube category amongst Indians. Entertainment channels Sony Entertainment Television and Zee TV have grabbed their respective positions in the top 10 YouTube channels list of 2018. Together, their combined viewership was 31.8 billion, as per Vidooly’s data. Since these channels cater to the entertainment requirements of the whole family, they have become a household name amongst the people.

As we reach the third category, the viewership slides way below than the 100-billion mark that we have seen in the first two categories. Film & Animation has made it to the third position in the list of top Indian categories on YouTube in 2018 with 38.7 billion views. Some of the popular names in this category are Dharma Productions, Ultra Bollywood, Shemaroo, Venus and others. If you go to these channels, you’ll find movie trailers, movie scenes, Bollywood songs and behind-the-scenes videos of Hindi movies.

News content attracts massive attention in India, not just on television but on digital media as well. It does not come as a surprise that major news channels in India have come up with their own YouTube channels to keep their digital audience informed about the current affairs of the country and the world. Together, all news channels have grabbed 29 billion views in the world of YouTube. Some of the top news channels like Aaj Tak, India TV, and ABP News have made a mark in both the TV and digital space. No wonder, this category grabs the fourth spot in the list of top Indian categories on YouTube in 2018.

Kids channels have evolved to be a wide vertical of content and have made it to the fifth spot in the list of top Indian categories on YouTube for 2018. Even though the target group is not kids themselves, these channels have found lucrative ways to reach out to the parents. Old nursery rhymes have been given a brand new flavour by playing with animation and graphics that appeal to the tech-savvy kids and parents alike. The whole category in itself has brought about 28.9 billion views collectively in 2018.

As independent content creators like Bhuvan Bam and Amit Bhadana have been making a mark on the YouTube scene, comedy has made its way to the top Indian categories on YouTube list in 2018. In September 2018, both BB Ki Vines and Amit Bhadana were competing for the 10-million subscriber race. Bhuvan Bam finally won to become the first individual content creator to grab 10 million subscribers. Ashish Chanchlani Vines, Filtercopy, The Timeliners became some of the other popular comedy channels which attracted a lot of attention this year.

With 7.1 billion views, Education has made it to the seventh spot on the list of top Indian categories on YouTube in 2018. Educational videos pick up complex and informative topics and simplify them in more entertaining and thought-provoking ways. Most of the times, they have a niche audience like college or school students or those preparing for entrance exams and interviews. Channels such a ZeeQ India, Unacademy and wifistudy are some of the popular names in this category.

HowTo videos teach you how to do a specific task by demonstrating the process. It’s quite a popular category and it comes as no surprise that this has grabbed its spot in the top Indian categories on YouTube 2018 list. It’s an exciting genre with Makeup, life hacks, styling, and lots more in its kitty. Anaysa, MyMissAnand are some of the top channels in this category.

As ‘Vlogging’ is picking up pace, this category is becoming the next big thing by making it to this list of top Indian categories on YouTube with 5.2 billion views. Steered mostly by YouTube influencers who share their life with people through their YouTube channels, this category also boasts of motivational speakers, people who speak on personal growth. Creative professionals like dancers and singers also come under this category. Sandeep Maheshwari, Ritu’s Dance Studio, Dr. Vivek Bindra are a few popular names.

Driven by modern-day animation technologies, this category has managed to grab 4.4 billion views. Animated characters like Chhota Bheem, SpongeBob & friends, Ninja Turtles, Powerpuff Girls and others have made this genre a hit with kids and adults alike. Nickelodeon, Cartoon Network India and Wow Kidz Action are some of the channels that have brought this category to the list of top 10 categories on YouTube.

Download Vidooly’s annual report by clicking the link below. This is ultimate YouTube report of 2018 covering every top creator in 18 different categories. Here is the list of insights that you are going to get from the report.