The internet consumers of today are highly interested in content that is streamed in real time be it games, T.V, movies or sports. And hence the rise of live video streaming services. Twitch is one of them and is clearly ruling the market with over 2.2 million unique monthly streamers and an excess of 292 billion minutes of content watched.

This platform is owned by Amazon and has successfully created a vast community of streamers and viewers who are majorly interested in online video gaming. It is estimated that by 2020, Twitch could be worth $20 billion, and generate $1 billion in annual revenue.

What makes Twitch successful is the creativity of its streamers. So we’ve compiled a list of top 10 most popular Twitch streamers sorted by Channel Views to introduce you to the platform in case you didn’t already know. 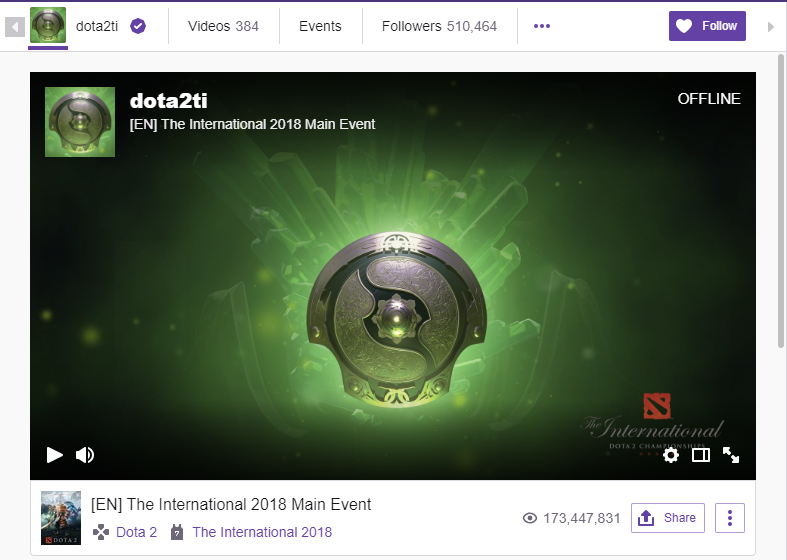 The gaming community on Twitch definitely is aware of the streamer “dota2ti” considering the channel’s massive viewership of more than 21.7 million in the month of August 2018. Even though the channel has a relatively low follower base of 510.5K, it’s gradual growth has to lead to an inflated viewership last month. The channel has a balanced mix of broadcasts, clips, short and long videos and stands on the first spot of the top 10 most popular Twitch streamers.

As the channel name suggests, it is solely dedicated towards live streaming the game “Dota 2”. It is a free-to-play multiplayer online battle arena (MOBA) video game developed and published by Valve Corporation. The game is the stand-alone sequel to Defense of the Ancients (DotA), which was a community-created mod for Blizzard Entertainment’s Warcraft III: Reign of Chaos and its expansion pack, The Frozen Throne. The game is played in matches between two teams of five players, with each team occupying and defending their own separate base on the map. 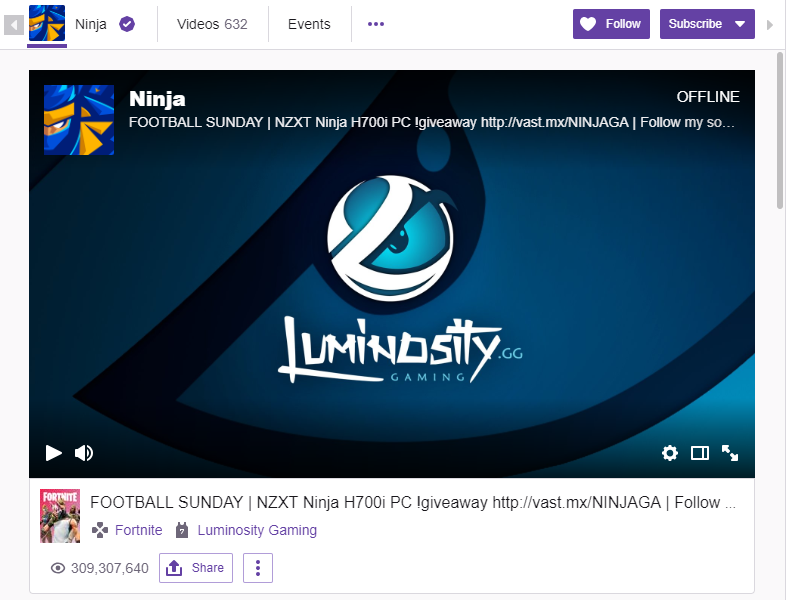 With more than 11.1 million followers, Ninja is currently the biggest streamer on Twitch as per the follower base. The person behind this channel is a 26-year-old Tyler Blevins. He has been able to break all previous Twitch records by streaming alongside the rapper Drake. While he does occasionally try other games out there, Ninja is primarily known for his “Fortnite” gameplay and any fans of that game should definitely check him out. The channel and stands on the second spot of the top 10 most popular Twitch streamers.

In the month of August 2018, the channel garnered over 19.8 million views. Fortnite is an online video game created in 2017, developed by Epic Games. The game modes include “Fortnite: Save the World”, a cooperative shooter-survival game for up to four players to fight off zombie-like creatures and defend objects with fortifications they can build, and “Fortnite Battle Royale”, a free-to-play battle royale game where up to 100 players fight in increasingly-smaller spaces to be the last person standing. 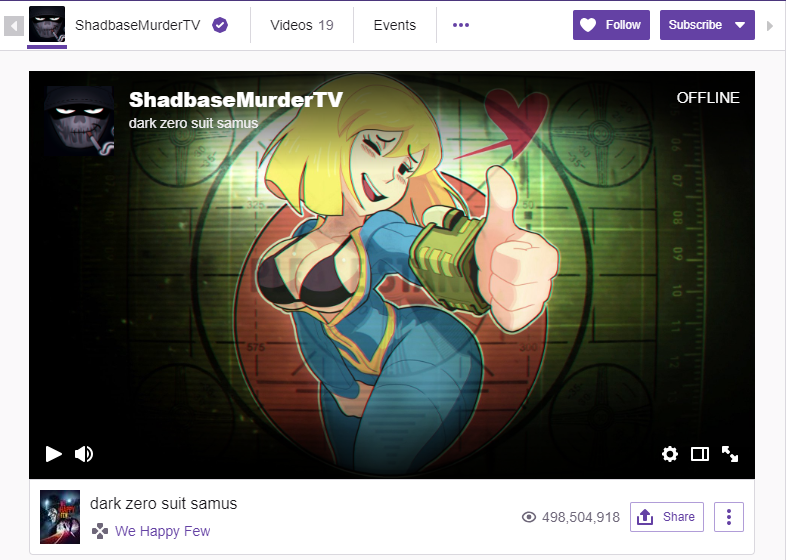 ShadbaseMurderTV is one of the new channels on Twitch which is seemingly getting more popular by the day. Although it only has a follower base of 117.5K as of now, it’s viewership is something to take note of – 10.2 million views in the month of August 2018. As of now the channel consists of only broadcasts and stands on the third spot of the top 10 most popular Twitch streamers.

The channel is solely focused on the game “We Happy Few” and only has about 19 videos currently. We Happy Few is an action-adventure game developed by Compulsion Games and published by Gearbox Publishing. Played from a first-person perspective, the game combines role-playing, survival, and light roguelike elements. Taking place within the mid-1960s, following an alternative version of World War II, players take control over one of three characters, each of whom seek to complete a personal task while escaping the fictional city of Wellington Wells – a crumbling dystopia on the verge of societal collapse, due to the overuse of a hallucinogenic drug that keeps its inhabitants blissfully unaware about the truth of their world, while leaving them easily manipulated and lacking morals. 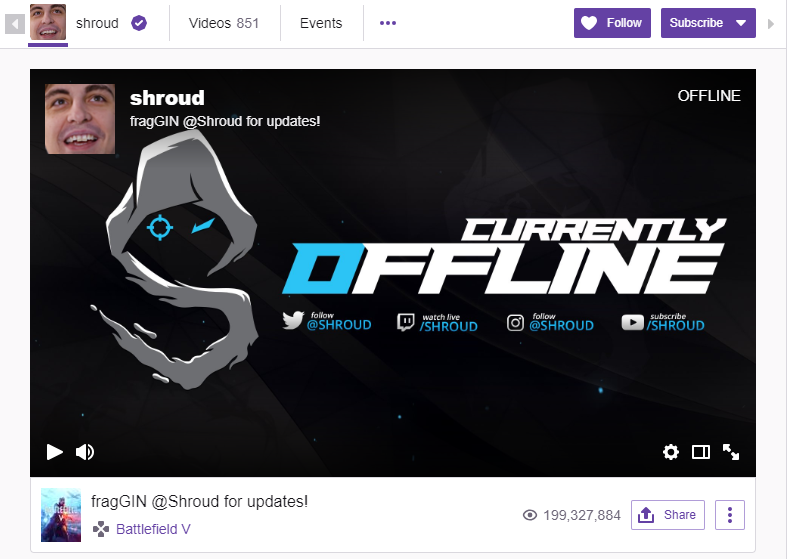 Shroud is one of the top Twitch channels with a follower base of more than 4.2 million and an August 2018 viewership of more than 6.7 million. This channel is owned by Michael Grzesiek who is considered to be one of the most well-known players on the scene and entertaining to watch in action. The channel stands on the fourth spot of the top 10 most popular Twitch streamers.

His primary games are PUBG, H1Z1, Battlefield V, Tom Clancy’s The Division, The Culling, Counter-Strike: Global Offensive (CS:GO), and Tom Clancy’s Rainbow Six: Siege. Michael is known for offering great tactical advises and strategical knowledge to his viewers on how to go about winning almost every game. This definitely comes from his previous experience and success with a number of eSports teams before deciding to step down from competing to stream full time on Twitch. 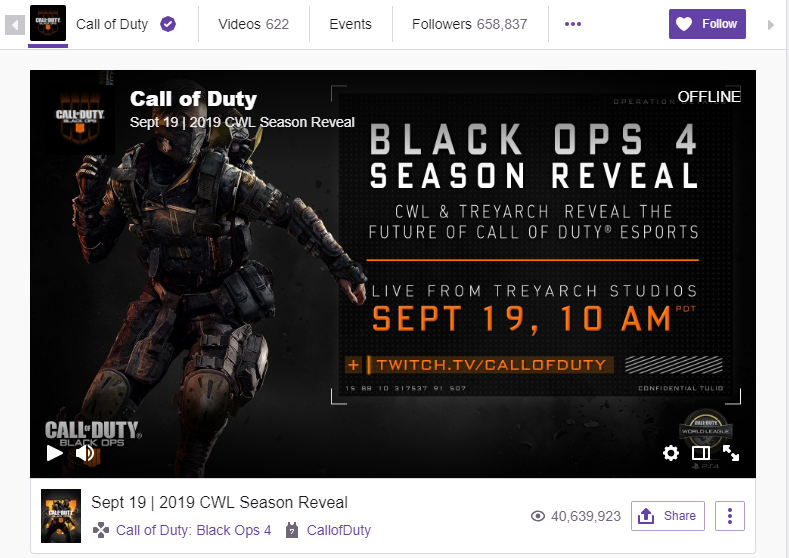 With the follower base of more than 658.7K and August 2018 viewership of more than 6.6 million, the channel ‘Call of Duty’ stands on the fifth spot of the top 10 most popular Twitch streamers. The channel has a mix of broadcasts, clips, short and long videos.

The channel is named after the game “Call Of Duty” and that makes it obvious that it is the ultimate destination for the lover of this game. Call of Duty is a first-person shooter video game franchise. Several spin-off games have been released. The earlier games in the series are set primarily in World War II, but later games like “Call of Duty 4: Modern Warfare” is set in modern times or in futuristic settings. The most recent game, “Call of Duty: WWII”, was released in late 2017. An upcoming title, “Call of Duty: Black Ops 4”, is in development and to be released on October 12, 2018. 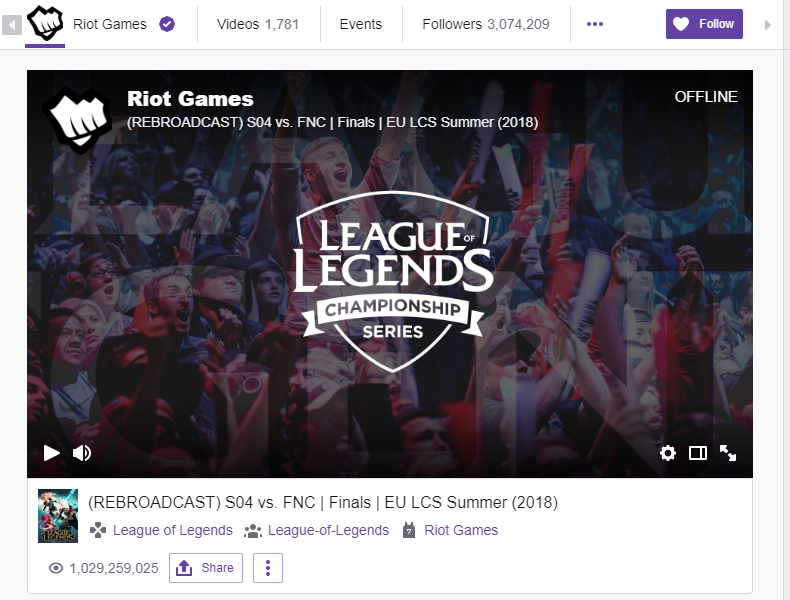 Unlike other streamers who showcase their own games, RiotGames is the official eSports channel for the MOBA League of Legends. It covers a variety of League of Legends tournaments and events. The channel boasts a follower base of more than 3 million and has garnered more than 5.9 million views in the month of August 2018 which makes it stands on the sixth spot of the top 10 most popular Twitch streamers.

Riot Games is an American video games company and eSports organizer. They use their Twitch channel to live stream eSports championships, with a particular emphasis on the North American and European League of Legends Championship Series. It was founded by Brandon “Ryze” Beck and Marc “Tryndamere” Merrill in 2006 – initially as an indie game developer. 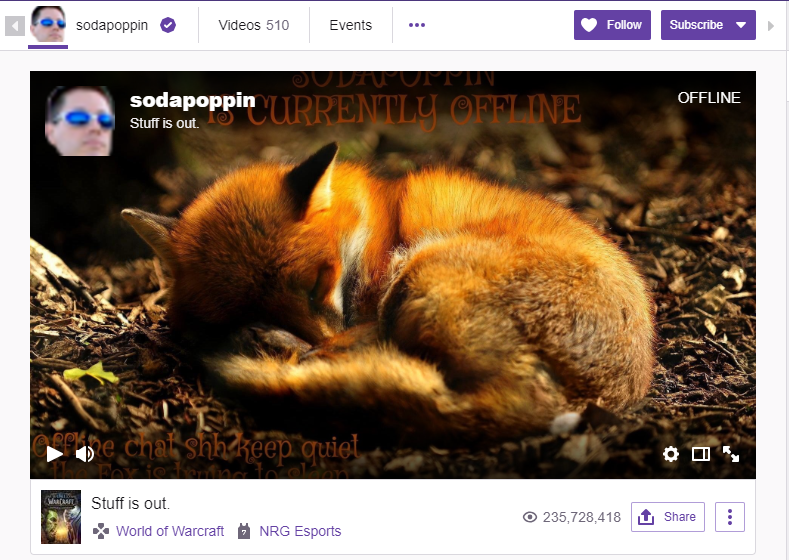 The Sodapoppin channel is owned by Chance Morris who started streaming as a 13-year-old in 2008 and continues to enjoy online success until this day into his early twenties. The channel has a follower base of 2.1 million and has garnered more than 4.6 million views in the month of August 2018 making it stand on the seventh spot of the top 10 most popular Twitch streamers.

Chance is a hardcore “World of Warcraft” player and he focuses on playing a variety of games as well, jumping to a new game almost every day. World of Warcraft (WoW) is a massively multiplayer online role-playing game (MMORPG) released in 2004 by Blizzard Entertainment. It is the fourth released game set in the Warcraft fantasy universe. World of Warcraft takes place within the Warcraft World of Azeroth, approximately four years after the events at the conclusion of Blizzard’s previous Warcraft release, “Warcraft III: The Frozen Throne”. 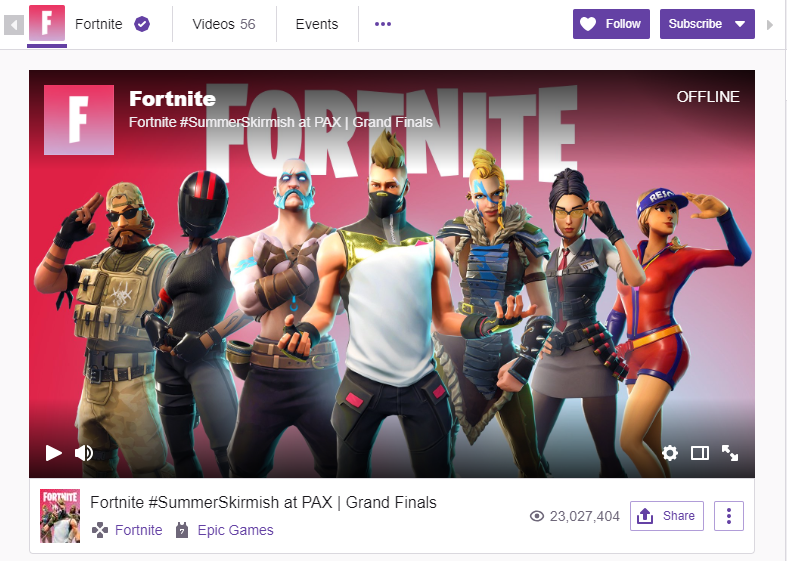 With more than 1.2 million followers and an August 2018 viewership of 4 million, the channel “Fortnite” stands on the eight spot of the top 10 most popular Twitch streamers. It is a relatively new channel considering that it only has 56 videos and the game “Fortnite” released only last year.

As the channel name suggests, it focuses only streaming of the game “Fortnite”. Fortnite is an online video game created in 2017, developed by Epic Games. The game modes include “Fortnite: Save the World”, a cooperative shooter-survival game for up to four players to fight off zombie-like creatures and defend objects with fortifications they can build, and “Fortnite Battle Royale”, a free-to-play battle royale game where up to 100 players fight in increasingly-smaller spaces to be the last person standing. 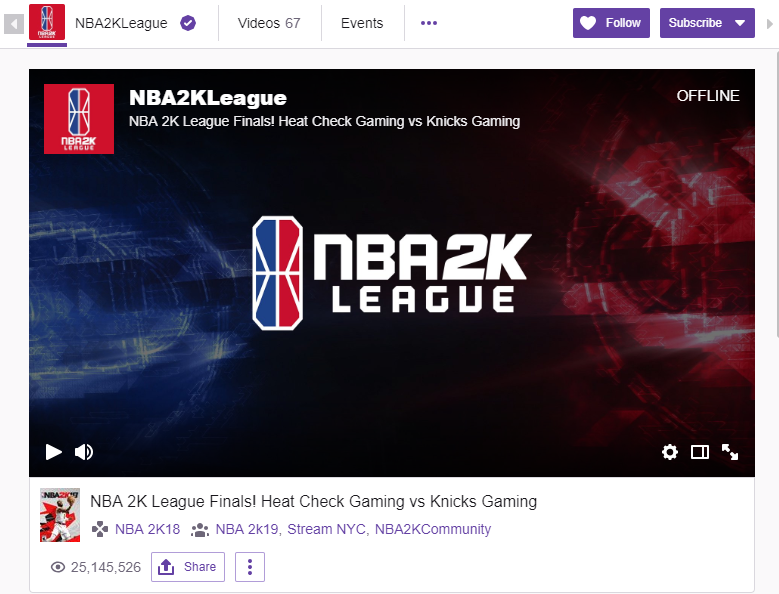 The channel NBA2KLeague has a massive viewership of 3.8 million in the month of August 2018 despite its relatively small follower base of 69K only. This channel also seems to be new in the platform as it currently only has 67 videos which are split into broadcasts, clips, short and long videos. The channel stands on the ninth spot of the top 10 most popular Twitch streamers.

As the channel name suggests, it is focused on the “NBA 2K” game series. NBA 2K series is a series of basketball simulation video games developed and released annually since 1999. The premise of each game in the series is to emulate the sport of basketball, more specifically, the “National Basketball Association”, and present improvements over the previous installments. The series consists of eighteen main installments and several spinoff-style titles. It has seen releases on eighteen different platforms. The NBA 2K series has also been used in eSports. The series has consistently achieved critical and commercial success. 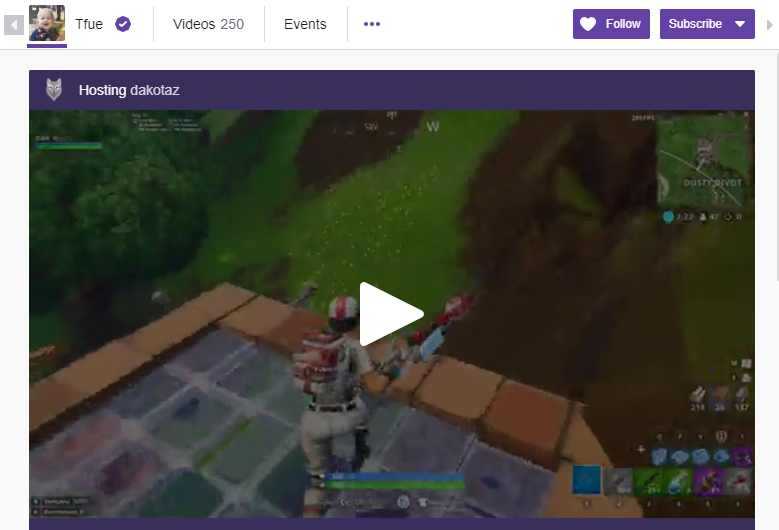 With more than 2.5 million followers and the August 2018 viewership of more than 3.8 million, the channel Tfue stands on the last spot of the top 10 most popular Twitch streamers.

The channel focuses majorly on the game “Fortnite” which as two modes – “Fortnite: Save the World” and “Fortnite Battle Royale”, each with its own characteristics. The game gained massive popularity right from its release in late 2017.